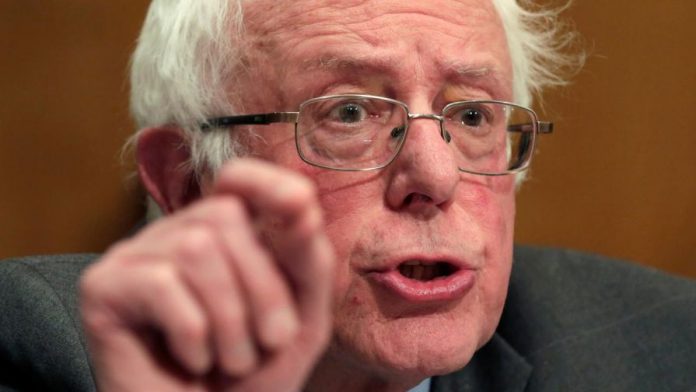 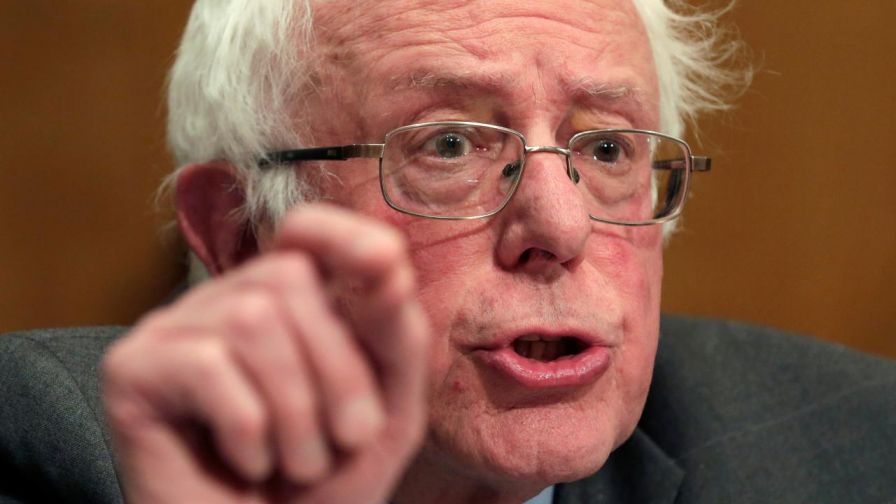 After weeks of promotion and speculation, Sen. Bernie Sanders officially unveiled his plan to move the U.S. health care operation to a single-payer system last week.

With the ObamaCare debate continuing in the U.S., popularity for the European-style health care model of single-payer has gained more traction, especially among more progressive Democrats.

“Today we begin the long and difficult struggle to end the international embarrassment of the United States being the only major country on Earth not to guarantee health care to all its people,” Sanders, I-Vt., said in a statement.

He blamed Republicans for “trying to take away health care from up to 32 million” people. “We have a better idea: guarantee health care to all people as a right, not a privilege, through a Medicare for All, single-payer health care program,” Sanders said.

Even before his much-anticipated plan was announced, Sanders shored up support for a single-payer system among many prominent Democrats, including Sens. Elizabeth Warren, D-Mass., and Kamala Harris, D-Calif. – two women largely thought to be potential 2020 presidential contenders. His legislation already has 16 co-sponsors.

“Bernie Sanders is pushing hard for a single payer healthcare plan – a curse on the U.S. [and] its people,” Trump said. “I told Republicans to approve healthcare fast or this would happen. But don’t worry, I will vote because I love our country [and] its people.”

Some states have already tried – and failed – to implement such a system, in which the government serves as the sole payer for health care costs. Like the current health care law and recent GOP proposals to overhaul it, single-payer plans are controversial.

Here is a look at what single-payer health care is, and how it compares to other models.

What is single-payer health care?

“The basic idea of single-payer is to cover everybody with a single government program, and that program would basically cover all the doctors and hospitals,” Dr. Adam Gaffney told Fox News.

SINGLE-PAYER HEALTH CARE GAINS MOMENTUM – BUT IS IT AFFORDABLE?

Gaffney is an instructor of medicine at Harvard Medical School and practices pulmonary and critical care medicine at Cambridge Health Alliance.

What does Sanders’ plan do?

Sanders’ Medicare for All plan would be implemented over a four-year period, according to a summary of the bill released by his Senate office. 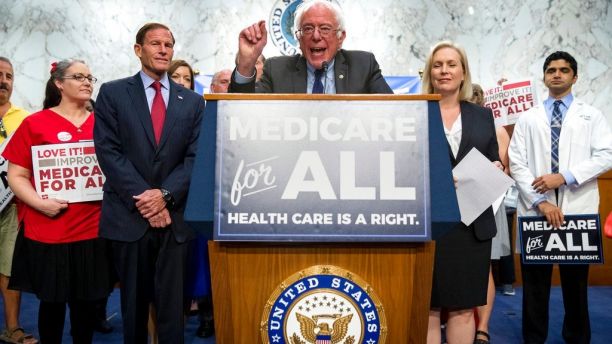 Sen. Bernie Sanders, I-Vt., joined by Democratic senators and supporters, unveils his Medicare for All legislation to reform health care.

In the first year, the plan would call for the improvement of “traditional Medicare for seniors and people with disabilities by covering dental, vision and hearing aids” – things that are not covered under the current law.

The plan also would allow children under the age of 18 to enroll in the Medicare for All program in the initial stage of implementation.

Keeping in line with a large promise of ObamaCare, Sanders’ plan promises that Americans will be able to choose their health care providers.

The plan also promises to lower the costs of prescription drugs, as it would give the federal government “the ability to stand up to drug companies and negotiate fair prices for the American people,” the summary said.

What’s the argument for single-payer?

Gaffney, who works with the progressive advocacy group Physicians for a National Health Program (PNHP), contended that single-payer systems give the consumer more choices when it comes to choosing a doctor or hospital.

“It gives people real choice when it comes to health care.”

“Under our current system of insurance networks, of out-of-network billing, of high co-payments, people can often not go and receive the care they need,” he added.

A slight majority of Americans currently support a single-payer system, according to a June poll from the Kaiser Family Foundation. The 53 percent in support of single-payer is slightly higher than in previous years, the non-profit found.

“There’s a rise in energy and passion around this,” Gaffney said, attributing the increased support to the 2016 presidential campaign of Sanders, who was widely popular among younger voters. Sanders heavily campaigned on a Medicare for All platform.

However, Michael Tanner, a senior fellow at the libertarian Cato Institute, attributed the increase in support to the Affordable Care Act “not working out quite the way” voters had hoped.

“I think the letdown after ObamaCare has led a lot of Democrats to say, OK, we need to go further,” Tanner told Fox News.

What’s the argument against it?

Joel White, president of the Council for Affordable Health Coverage, expressed opposition to single-payer because of the “devil in the details.”

“In other countries, we have seen single-payer shows us that putting more control of health care into the hands of politicians is bad medicine,” White told Fox News. “Costs and taxes will rise, or patient access will be severely diminished – turning America’s medical system into a third-world product.”

“I want people to understand that there is a trade-off involved.”

And Tanner called the idea of single-payer a “utopia” – meaning, “there is no such thing as a health care system anywhere in the world that provides unlimited care to everybody.”

“I want people to understand that there is a trade-off involved,” Tanner said. “You can have widespread care that provides benefits that are well beyond the current insurance system, but that doesn’t have co-payments or deductibles. Or you can have low cost. But you can’t have both.”

The idea of the government fully taking over health care also doesn’t sit well with some people, Tanner said.

“The government hasn’t done a very good job with the health care system it already runs,” he said. “Medicare is nearly $50 trillion in debt, there [are] still all sorts of problems with the VA system, Medicaid provides coverage that is barely better than being uninsured. So the government’s track record is not very successful.”

A common misconception is that ObamaCare provides universal coverage. Unlike a single-payer program, the Affordable Care Act does not provide universal health insurance coverage because approximately 28 million people are still uninsured. 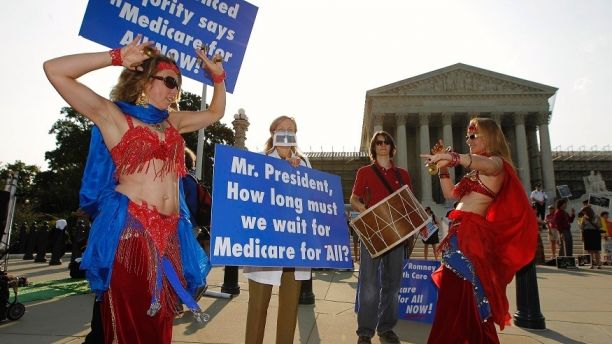 Belly dancers outside of the Supreme Court in 2012 call for a single-payer national health insurance program as the nation’s highest court was set to rule on the Obama administration’s health care overhaul.

For example, a government could require all citizens to purchase health insurance – including through a marketplace like ObamaCare – but it’s not single-payer unless the government is also the sole provider of health care payments.

In fact, according to a chart released by PNHP, ObamaCare has more similarities to the failed Republican American Health Care Act (AHCA) than to a single-payer program.

Both the Affordable Care Act and the AHCA allow for insurance companies to have some control over a person’s choice of health care provider, and both allow insurers to control premiums and deductible costs.

How much would it cost?

There is widespread disagreement over how much it would cost to implement a single-payer health care system. Supporters say it would cut excessive administrative costs compared to those incurred by private insurers. But critics, including most Republicans, warn that the savings would be less dramatic than expected – and the system would cost too much.

Sanders estimates the price tag for his plan would be about $1.38 trillion per year for the first 10 years, based on an analysis conducted by an economist at the University of Massachusetts-Amherst.

But other experts have projected higher costs — anywhere from $2.5 trillion a year, according to the nonpartisan Urban Institute, to the Committee for a Responsible Federal Budget’s estimate of $2.8 trillion a year.

Has the U.S. ever tried to implement single-payer? 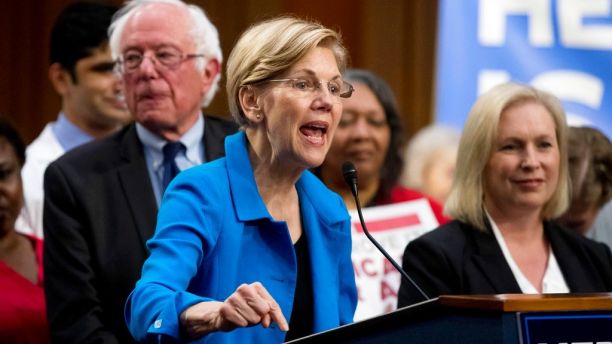 Sen. Elizabeth Warren, D-Mass., speaks in support of Sanders’ Medicare for All legislation.

The legislation currently has 117 cosponsors – the largest number of House Democrats to sponsor a single-payer bill to date, Gaffney said. No Republicans have signed on to the bill.

Regardless of support among congressional Democrats and liberal progressives, single-payer systems haven’t been successful at the state-level so far in terms of implementation.

California Assembly Speaker Anthony Rendon, a Democrat, was forced to shelve a single-payer plan after the $400 billion price tag was revealed. Vermont, too, decided to forgo a single-player plan in 2014 because of cost.

Harold Pollack, a University of Chicago professor who has written extensively on health care policy, said he does not believe that single-payer can be achieved at the state level without the federal government as “an eager partner.”

“The impact [of single-payer] will be very different on different people,” Pollack said, adding that the “big failure of the American health care system” is that the government doesn’t currently leverage low prices.

Sanders told Vermont Public Radio last month that he understands moving to a true single-payer system would take time to implement and proposed lowering the age of Medicare eligibility to 55 years of age.

In California, the bill is not technically dead as legislators work in sessions.