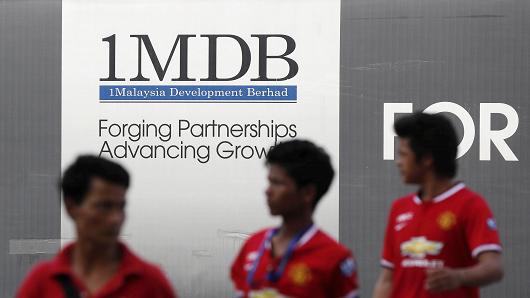 Authorities around the world, including the United States, Switzerland and Singapore have looked into anti-money laundering breaches relating to 1MDB.

“What do we want these fines to achieve? Increasingly, the MAS’ approach is to pin responsibility on the individuals who made the mistakes, who are responsible for the lapses and their supervisors,” Ravi Menon, MAS managing director, said Thursday.

“When you fine a bank billions of dollars, it hurts basically shareholders and other stakeholders. It doesn’t hurt the board and senior management, and it doesn’t hurt the individuals much. And that is what, in my view, one of the failings of the current regime globally that people continue to do wrong things because they’ve not been held personally liable and responsible.”

MAS’ investigation into 1MDB fund flows was a key highlight in the central bank’s annual report released on Thursday. In addition to penalizing the banks, it also barred several individuals from participating in the Singapore finance industry.

Singapore is among at least six countries that launched probes into allegations that nearly $700 million had flowed from the debt-ridden 1MDB into Malaysian Prime Minister Najib Razak’s personal bank account. Najib has repeatedly denied wrongdoing and cleared of offences by Malaysian authorities.

Menon said even though MAS had completed its review, it is prepared to re-open the files again should there be any relevant new information or leads — underscoring the city-state’s commitment in upholding the integrity of its finance sector, a key component of the economy.

He added the MAS found nothing new in the latest filing the U.S. Department of Justice that warranted further action.

“Last year, I said that the findings on the 1MDB-related transactions that flowed through here had made a dent in our reputation as a clean and trusted financial centre. I believe we have begun the process of restoring that reputation,” Menon said.