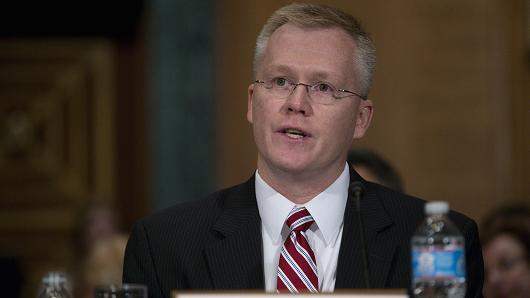 The pay-ratio rule that aims to make companies disclose the difference between a CEO’s compensation and that of employees might never actually go into practice.

The Securities and Exchange Commission is taking another look at the newly mandated disclosures, The Wall Street Journal reported.

The pay-ratio rule in question requires companies to report the median pay of their workers and compare it to the CEO’s pay. The rule was approved in 2015 and is part of the 2010 Dodd-Frank Act. It is slated to go into effect this year for reporting in 2018.

Republican Michael Piwowar, the acting head of the SEC, said that some firms “have begun to encounter unanticipated compliance difficulties that may hinder them in meeting the reporting deadline,” according to The Wall Street Journal.

Companies are due to start reporting the metric for this year’s pay in 2018, among protestations that it is costly to calculate and isn’t useful.

Piwowar’s move could be a sign that unfinished rules under the Dodd-Frank Act, some of which look to gauge whether executive pay is linked to the firm’s financial performance, could be up next for review.

CNBC reached out to the SEC for comment but did not receive an immediate reply.

Read more about this report at The Wall Street Journal.