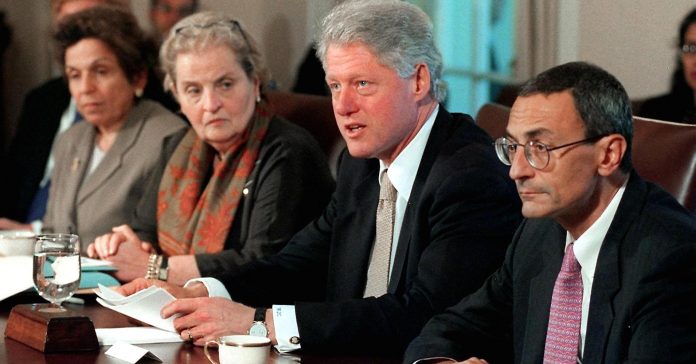 Joe Conason, a liberal journalist who wrote a well-sourced book about the Clinton White House scandals, said the Russia probe will be a “full employment act for the D.C. defense bar.”

Hillary and Bill Clinton were in fact “dead broke” when they left office after racking up $10 million dollars in legal debt. But so were many of their staffers, who had to hire lawyers themselves (the Clintons later raised money to help defray aides’ bills).

Clinton’s personal secretary, Betty Currie, recalled feeling like she was putting her colleagues in jeopardy when she spoke with prosecutors.

“They kept asking me questions about people, and at one point I told them, ‘I cannot mention another name to you, because as soon as I mention a name, you subpoena these young kids who can’t afford any lawyers,'” she said.

Former Clinton adviser Sidney Blumenthal joked at a staff meeting once that his recent deposition had been “a very expensive form of therapy,” he wrote in his book.

On his first day on the job as Clinton’s new legislative liaison, Lawrence Stein was kicked out of a meeting and told, “You might want to find another room because you don’t want to hire a lawyer.”

White House Communications Director George Stephanopoulos was swarmed by reporters and TV cameras as climbed into a taxi on his way to a meeting with the grand jury.

“By the end of my White House tenure, receiving a subpoena was a routine matter, another item in the in-box,” Stephanopoulos, now at ABC News, wrote in his book, “All too Human.”

Some staffers also faced damage to their reputations as salacious stories leaked to the press about their personal lives, while others were found to have committed unrelated crimes. One, the chief of staff to the Secretary of Agriculture, was sentenced to 27 months in prison lying to investigators about $22,000 in outside income. Housing Secretary Henry Cisneros plead guilty to making false statements and paid a $10,000 fine.

Aides were told not to take notes in meetings or even keep personal journals, since all of it could be subpoenaed. And they had to be careful about what they said to each other, even in private, since they could be compelled to testify against each other.

And the White House set up a dedicated team to focus on the investigations so the rest of the staff could pursue the president’s policy agenda.

“The president made it clear that there would be small group that would deal with this so everyone else could do their job for the American people,” said Ann Lewis, who was part the the scandal squad.

Trump’s White House seems to be taking a page from Clinton on that front, creating a “war room” that will be led by Chief of Staff Reince Priebus, senior adviser Steve Bannon, and son-in-law Jared Kushner, officials told NBC News.

But up to know, said Lewis, Trump’s team has been too loose-lipped, disorganized and undisciplined.

“It’s hard to see how they could do it worse,” said Lewis last week before disclosure of the war room. “Is it contained? No. Is there a system where your allies feel like they’re getting a steady stream of information? No. Is there a central team of credible people handling this? No.”

Bernard Nussbaum, Clinton’s first White House Counsel, who warned the president against appointing an independent counsel, said the damage can be devastating.

“They will chase your family. They’ll chase you…They’ll chase your friends,” Nussbaum told the Miller Center at the University of Virginia for an oral history project in which he was discussing advice he gave Clinton. “This will last as long as you’re president and beyond. They’ll be investigating things years from now that we haven’t even dreamed about today.”

Meanwhile, paranoia can pervade the cramped quarters of the West Wing as staffers worry if others will undermine them legally in the privacy of the grand jury chambers, by accident or not.

“It just creates havoc inside an already high-pressured organization that needs to have some sort of esprit de corps in order to function properly,” said Russell Riley, who directs the Presidential Oral History Program at the Miller Center, which has collected interviews with former officials since the Carter Administration.

“There’s this great sense of anxiety and suspicion about where the next shoe may drop,” Riley added.

Maloney, who oversaw about 100 staffers at the executive office, said their faith in Clinton’s ability to be a good president — warts and all — was what kept everyone going. He wonders if Trump aides feel that way.

“When you think about staff, this is not what you signed up for,” Maloney said. “Particularly when you are facing legal bills or reputational damage, and you have to answer questions from family and friends who ask you what you’re doing and why. It can cause real soul searching. And in those moments believing in the person you work for is critical.”