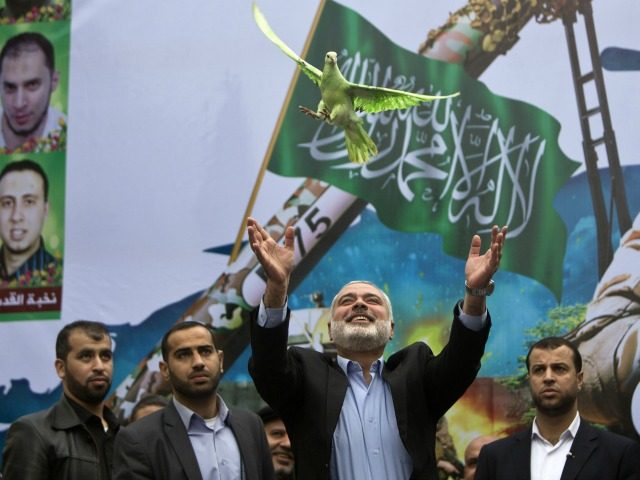 TEL AVIV – A leading Arabic newspaper this week published a damning column by a Saudi journalist claiming that Palestinians have missed too many opportunities for peace with Israelis and have always blamed others for their problems, even long before settlements existed, and further added that it was time for Hamas to end its violence against Israel as well as their futile dream of a “Palestine from the river to the sea.”

Writing in the London-based Arabic-language Al-Sharq Al-Awsat daily while President Donald Trump was on his state visit to Saudi Arabia, Mash’al Al-Sudairi, a columnist from the Gulf kingdom, asserted that from the 1940s until the present day, “Palestinian leaders, while in power, excelled in two things: rhetoric and missing opportunities.”

He criticized the Palestinians for their blanket refusal to accept the 1947 UN partition plan, which would have given them 49% of mandatory Palestine, far more than what is commonly discussed today in the two-state solution.

He further lambasted Palestinian leaders for accusing former Egyptian president Anwar Sadat of treason for signing a peace treaty. Moreover, writes Al-Sudairi, “One of the unforgivable opportunities missed by the Palestinian leaders was their refusal to sit in the seat earmarked for them by Sadat at the negotiating table, behind their own flag” and present their terms alongside representatives from the U.S., Israel, Egypt and the UN.

“Let it be noted that at that time not a single settlement existed in the West Bank, and [there was] not a single destroyed house in Gaza,” he added in the article, which was translated by the Middle East Media Research Institute (MEMRI).

Al-Sudairi then addressed Hamas leader Ismail Haniyeh, instructing him to stop firing rockets into Israel and focus his energies on reconciling with the Palestinian Authority in the West Bank.

“With all the respect that I have for the leader Haniyeh, I say to him: ‘When you determined [in the new Hamas policy document that the borders of Palestine are the borders] that existed prior to June 5, 1967, you implicitly and indirectly recognized Israel. Therefore, from now on you cannot throw a single stone at it, not to mention fire a single rocket against it.”

While Al-Sudairi’s last reprimand is to be applauded, it is certainly not clear from Hamas’ newly released policy document that any recognition of Israel exists. As MEMRI points out, the paragraph mentioning a Palestinian state in the 1967 boundaries, which ostensibly attests to the organization’s pragmatic evolution, is written in such a way that it is not possible to understand clearly whether Hamas actually accepts such a solution.

Furthermore, the document continues, “There is no compromise on any part of Palestine under any conditions, any circumstances, or any pressure, no matter how long the occupation continues. Hamas rejects any alternative to the complete liberation of Palestine from the river to the sea.”

The final nail in the coffin is the sentence “this does not mean recognition of the Zionist entity.”

However, Al-Sudairi does take Hamas to task over “the flowery and futile expression ‘Palestine from the river to the sea’ – as long as Gaza is detached from the West Bank.”

Will valor and sacrifice bring the leader Haniyeh to launch a historic initiative and consolidate unity in the Palestinian state that will be supported by the Arab brothers and the entire world?

Young Palestinians deserve to live, aspire, and act like the young people of other nations. We have had our fill of sorrow, oppression, idiocy and the spouting of extremist slogans that have eliminated wisdom and at the same time [forfeited] much land.

And, if we are talking about the [Palestinian state’s] territorial aspect, [it should be remembered that] Singapore occupies an area of only 710 km² – that is, one-ninth of the [combined] area of the West Bank and Gaza. Additionally, the population of the two [i.e., Singapore and the Palestinian territories] is similar – yet this Singapore’s annual income exceeds $400 billion – more than the income of every petro state … even though it has no natural resources [of its own].