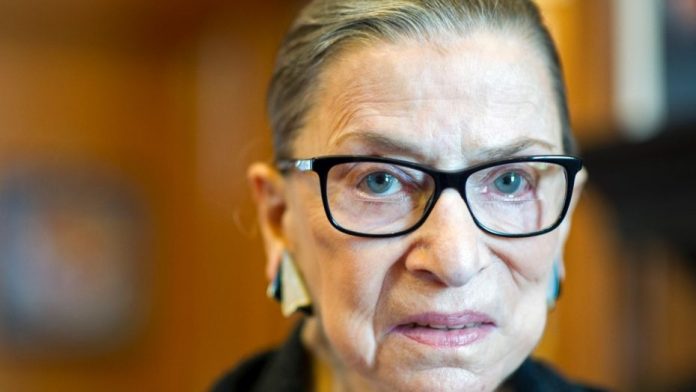 U.S. Supreme Court Justice Ruth Bader Ginsburg has three words for the women who shared their stories of abuse to spark the #MeToo movement: “It’s about time.”

Before Ginsburg slipped on her iconic judicial robe, the 84-year-old feminist from Brooklyn confessed she had her own brush with sexual harassment and gender inequality.

“Every woman of my vintage knows what sexual harassment is, although we didn’t have a name for it,” Ginsburg told a crowd during a forum to promote her new documentary “RBG” at the Sundance Film Festival in Park City, Utah, on Sunday. “The attitude toward sexual harassment was simply, ‘Get past it. Boys will be boys.’”

Clutching a microphone between both hands, Ginsburg told NPR legal correspondent and longtime friend Nina Totenberg, who was leading the discussion, about an incident that allegedly occurred when she was a law student at Cornell University in the early 1950s.

She shared concerns with her chemistry instructor over her “abilities” ahead of a big test. The teacher comforted her and told her he’d give her a practice exam to make her more comfortable with the material.

“The next day – on the test – the test is the practice exam. And I knew exactly what he wanted in return,” Ginsburg said. “That’s just one of many examples.”

Ginsburg didn’t just ignore the professor’s inappropriate gesture, she said. After the exam, Ginsburg walked straight up to the instructor and allegedly confronted him.

When Ginsburg began teaching at Rutgers Law School in 1964 she said that she quickly realized she was being treated differently than her male colleagues.

Since Rutgers was a state school, Ginsburg knew she’d be taking a pay cut — but when the dean told her how much of a cut, she was astonished. She asked how much a male colleague who had been out of law school about the same amount of time of her was being paid.

“Ruth, he has a wife and two children to support. You have a husband with a good paying job in New York,” the dean responded.

In response to the dean’s remarks, a group of women employed at Rutgers worked together to file an Equal Pay Act complaint, which the university later settled.

Ginsburg recalled another example of gender inequality in 1972 when she was a professor at Columbia University. A feminist told her the school issued lay-off notices to 25 women in the maintenance department, but not a single man received a notice.

“And she said to me, ‘What are you going to do about it?'” Ginsburg recalled.

Ginsburg told the university’s vice president for business’ office the school was violating Title VII of the 1964 Civil Rights Act, which prohibits workplace discrimination based on religion, national origin, race, color or sex.

Columbia eventually found a way to avoid laying off anyone, Ginsburg said.

A lot has changed since then, Ginsburg explained, as she shared her final thoughts on the #MeToo movement that’s sweeping the nation.

“For so long women were silent, thinking there was nothing you could do about it,” Ginsburg said. “But now the law is on the side of women or men who encounter harassment, and that’s a good thing.”

Right now, Ginsburg said she’s not concerned about the potential backlash the #MeToo movement might cause women.

“Let’s see where it goes. So far, its been great,” Ginsburg said. “But when I see women appearing every place, in numbers, I’m less worried about backlash than I might have been 20 years ago.”