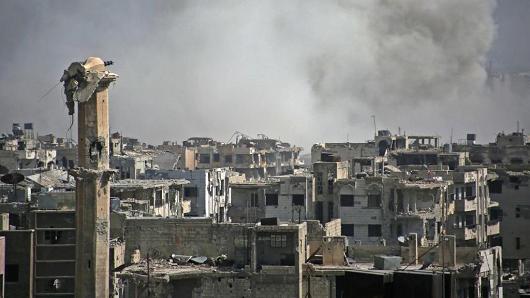 Smoke billows following a reported air strike by Syrian government forces in the rebel-held parts of Jobar in Damascus, Syria on August 9, 2017.

The Russian military has threatened action against the U.S. is it strikes Syria’s capital city of Damascus, according to multiple news reports.

The threat, by Chief of Russia’s General Staff Valery Gerasimov, was widely reported by Russia media sites such as state news agency RIA and Tass. It said Gerasimov said Russia had “reliable information” about militants preparing to falsify a government chemical attack against civilians.

“In several districts of Eastern Ghouta, a crowd was assembled with women, children and old people, brought from other regions, who were to represent the victims of the chemical incident, ” Gerasimov said, according to RIA.

Gerasimov said Russia would respond to a U.S. strike on Syria if the lives of Russian servicemen were threatened, targeting any missiles and launchers involved.

The comments come as Syrian President Bashar Al Assad’s regime, which is supported by Russia, continues to carry out airstrikes over the rebel-held enclave of Eastern Ghouta just outside Damascus.

The United Nations Security Council has demanded a 30-day ceasefire to allow nearly 1,000 sick and wounded civilians to leave so they can seek urgent medical treatment. On Monday, the U.S. threatened to “act if we must” if the UN ceasefire resolution continues to be ignored.