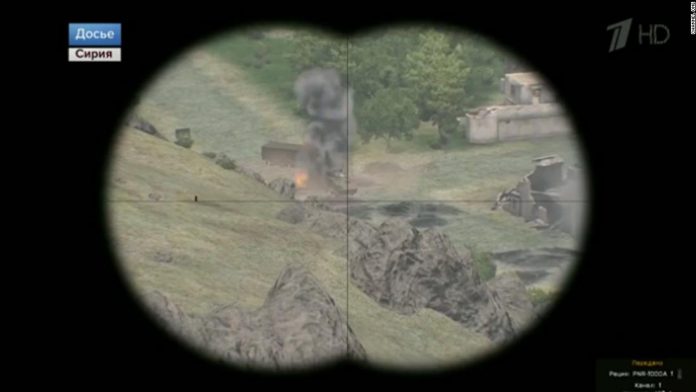 As it turns out, the short clip is actually from a computer game.

The footage was part of the weekly Voskresnoye Vremya program on state-run Channel One TV. Sunday’s edition was a tribute to Russia’s armed forces in occasion of Defender of the Fatherland Day, and an entire section was dedicated to Alexander Prokhorenko, a Russian pilot who was posthumously awarded the title of Hero of the Russian Federation.
Prokhorenko was battling to free the ancient Syrian city of Palmyra, but he found himself surrounded by Islamic militants, so he called in an airstrike on his own position.

As the video package moves swiftly to show how Su-25s operate in Syria using archive footage, a gun-sight clip that visually appears to be from a video game is edited in.

A Pikabu user posted a still image of the short footage with the simple comment “Arma 3 on Channel One.” Arma 3 is a tactical shooter video game released in 2013. Its developers, Bohemia Interactive, claims it offers “true combat game play in a massive military sandbox.”
Later, Channel One acknowledged the mistake in a statement to radio station Govorit Moskva, claiming the editor wrongly used a clip from a previous story on computer games:

“The use of this shot was a mistake made by the editor who took it from the archive. Earlier this frame was used in a package about computer games,” the statement reads.

Users on Pikabu — which some call the Russian equivalent of Reddit — started debating about the spectacular blunder and whether it was intentional.

DildaN3 wrote: “This shot wasn’t needed there at all, it appears only for a fraction of a second, it doesn’t have any meaning. Why did they add it in? Maybe it is a hidden message from the employees of Channel One? Like: ‘They are making us do this, help!’?”

Another user pointed out that it’s not the first time it happened.

Last November, the Russian Defense Ministry claimed the US is supporting the Islamic State, using a number of aerial images to support its stance. The pictures turned out to be from a 2015 promotional video for a gunship simulator video game.

CNN’s Mary Ilyushina and Anastasia Anashkina contributed to this report.