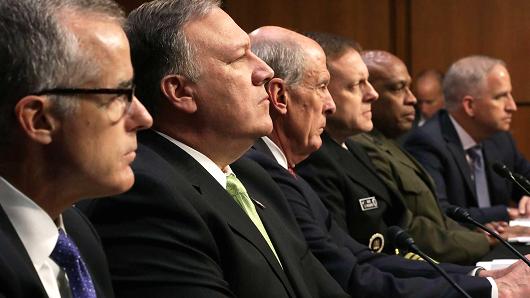 Russian political interference is spreading to more countries around the world, in part because the Internet and social media have made such meddling cheaper, according to senior U.S. intelligence officials.

“It sweeps across Europe and other places,” Daniel Coats, the director of national intelligence, told the Senate Intelligence Committee Thursday.

“The Russians have upped their game using social media and other opportunities in ways we haven’t seen before,” said Coats.

The hearing, which included the directors of six U.S. intelligence agencies, covered a broad range of worldwide threats, from Venezuela to Afghanistan.

The officials said that Russia has a history of interfering in other countries’ political process, but it has become more active and more aggressive in recent years.

“We have to put into context: this is not new,” said CIA Director Michael Pompeo. “Only the cost has been lessened.”

Coats told the panel that Russia is a threat to U.S. government, military, diplomatic, business and critical infrastructure.

“It’s a great threat to our democratic process,” said Coats.