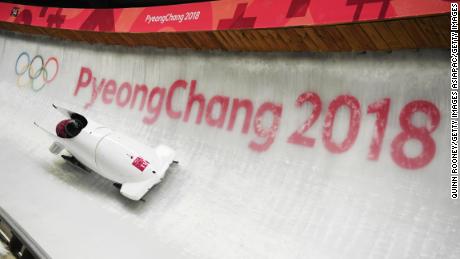 The country was banned from PyeongChang 2018 following state-sponsored doping, leading up to and including the Sochi 2014 Winter Olympics.

Two Russian athletes also failed drugs tests during the Games this month, but that hasn’t prevented Russia being reinstated.

“The ROC’s reinstatement comes as the examination of doping tests from the PyeongChang Olympics has ended. The IOC may confirm that the other results [of examination of Russian athletes’ doping samples] are negative. This means that the ROC’s rights have been fully reinstated.”

A team of 168 athletes who could prove they were clean from doping competed at February’s Winter Games as Olympic Athletes from Russia (OAR), under the Olympic flag and anthem.

But Bach stressed there is “no evidence of systemic doping and no evidence of the involvement of the Russian Olympic Committee” in either case.

Krushelnitckii and his wife and curling partner, Anastasia Bryzgalova, gave back their bronze medals, after he tested positive for meldonium.

“I have never either violated the rules of sports or used doping,” Krushelnitckii said in a statement published by Russian state news agency TASS.

Sergeeva, who failed to medal in the bobsleigh, tested positive in an out-of-competition test for the banned heart mediation trimetazidine.

The Russian Bobsled Federation said its medical team did not prescribe the drug to Sergeeva.

“The bobsled Federation of Russia and the athlete herself understand the extent of her responsibility and realize how what happened can respond to the fate of the whole team,” it said in a statement.

Russia’s Chef de Mission Stanislav Pozdnyakov apologized to the IOC for the violations and said they were “more to do with negligence than malicious intent.”

Despite being the third largest team in Pyeongchang, the Olympic Athletes from Russia (OAR) only finished 13th in the medal table — winning two golds, nine less than Sochi 2014.

There was controversy after the OAR team beat Germany to win men’s ice hockey gold on Sunday 25 February and then sang the Russian national anthem while the Olympic song was being played at the medal ceremony.

“We’re prohibited from having the flag so we had to do something at least,” said Russian player Bogdan Kiselevich. “We sang because we’re Russian people and when you win, the anthem is played. It was in our souls and heart. It’s freedom of speech.”

The IOC has yet to officially comment on the reinstatement of Russia’s Olympic membership.