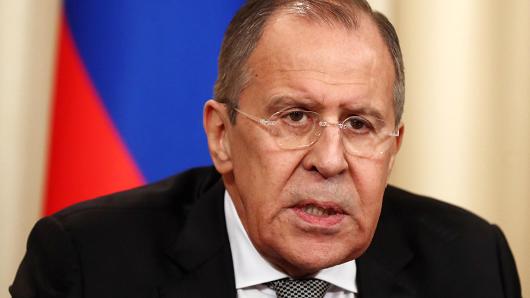 Russia’s Foreign Minister Sergei Lavrov looks on during a press conference following his talks with US Secretary of State Rex Tillerson and Russian President Vladimir Putin.

Russia’s foreign minister has accused the U.S. of not being straightforward about its intentions towards North Korea.

“Washington’s recent steps seem to be deliberately aimed at provoking Pyongyang to take some tough actions,” he noted. The U.S. should openly say if its provocative actions are aimed at destroying North Korea,” he said, according to the news agency.

North Korea tested another ballistic missile Tuesday, which it claimed could have reached the U.S. mainland. The test prompted a furious response from the U.S. with the country’s ambassador to the United Nations warning Wednesday that the regime could be “utterly destroyed” if its provocations started a military conflict.

North Korea is subject to many United Nations, U.S. and European sanctions due to its continued development of nuclear weapons and ballistic missile tests. The state is seen as a serious threat to international peace and security and its actions are seen as undermining a global agreement on the non-proliferation of nuclear weapons.

But Lavrov said that Washington was provoking North Korea too.

He pointed out that Washington “announced that large-scale unscheduled drills would held in December.” “It seems, they have done everything on purpose, to make (North Korean leader) Kim Jong Un lose control and make another desperate move,” he said.

“The Americans need to explain to us all what they are actually up to. If they seek a pretext to destroy North Korea, they should openly say so and the U.S. leadership should confirm it. Then we would decide how to respond,” Russia’s top diplomat added.

Lavrov said that Russia (which is itself under U.S. sanctions for its annexation of Crimea in 2014) is against U.S. proposals for an economic blockade of North Korea and believed the sanctions pressure has exhausted itself.

“Our attitude (towards U.S. proposals for more sanctions) is negative. We have said more than once that the sanctions pressure has in fact exhausted itself,” he said.