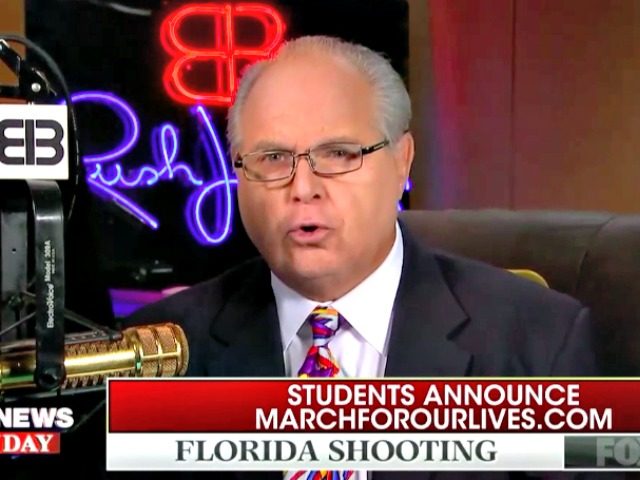 During his February 20 broadcast, Rush Limbaugh made clear that Democrats are focused on the politicization of mass shooting attacks rather than advancement of school safety.

Limbaugh pointed out that Democrats have spent two decades reacting to school shootings with calls for more gun control but have not offered one thing “to make our schools safer.” Instead, after a shooting occurs, he said the Democrats go “political” and “they make tracks for the NRA … and for the gun lobby.”

All the while, children largely remain in schools that are as wide open and unprotected as they were 20 years ago.

Limbaugh referenced the fact that an unarmed assistant football coach, Aaron Feis, was killed in the February 14 Florida school shooting and asked listeners to consider how different things might have been if that coach had had a gun. He said, “Imagine if he’d some ability to stop [the attack] without dying himself.”

He went on to discuss other unarmed individuals who were shot and asked, “Imagine if somebody in the school had had the means to fire back and stop this.”

But Limbaugh observed that discussing the option of arming teachers, even for the purpose of saving lives, is not tolerated. He said, “Let anyone suggest that we actually take steps inside these schools to be able to respond to these incidents when they happen and people say, ‘You can’t do that, you can’t take guns in schools.’”

Limbaugh made similar comments during the February 18 airing of Fox News Sunday with Chris Wallace. He told Wallace that schools will not be safe until we get passed our aversion to making them safe from within. He said, “We have armed security at virtually every public entity in this country, except schools. For some reason, they are a gun-free zone and everybody that wants to shoot up a school knows that they are going to be the only one armed.”

This scenario of vulnerability is perpetuated by the very Democrats who are so vocal against gun violence. Because of this, Limbaugh noted, school shootings will not end until we “get serious” about making a change.

AWR Hawkins is an award-winning Second Amendment columnist for Breitbart News, the host of the Breitbart podcast Bullets with AWR Hawkins, and the writer/curator of Down Range with AWR Hawkins, a weekly newsletter focused on all things Second Amendment, also for Breitbart News. He is the political analyst for Armed American Radio. Follow him on Twitter: @AWRHawkins. Reach him directly at awrhawkins@breitbart.com. Sign up to get Down Range at breitbart.com/downrange.