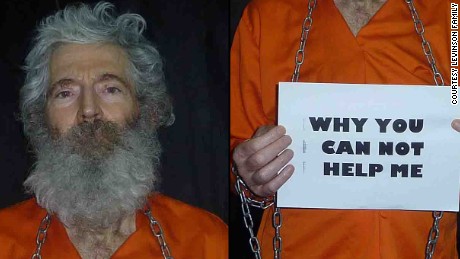 Other Facts:
During his career at the FBI, Levinson specialized in investigating organized crime in Russia.

His family says Levinson suffers from diabetes and high blood pressure among other illnesses.

Timeline:
1970s – Levinson is hired by the FBI after six years with the Drug Enforcement Agency.

2006 – Levinson is hired as a contractor by Tim Sampson, head of the Illicit Finance Group within the Office of Transnational Issues at the CIA, to write reports for the agency. The contract is for approximately $85,000. Three CIA employees, including Sampson, later lose their jobs for overstepping their authority as analysts and withholding information about Levinson after he disappeared.
March 8-9, 2007 – According to State Department officials, Levinson travels to Kish Island in Iran and checks into a hotel. Reportedly, Levinson is in the Mideast to investigate cigarette smuggling on behalf of a client. During the visit, he meets with American fugitive Dawud Salahuddin, who is the last person to acknowledge seeing him on March 9.
June 1, 2007 – President George W. Bush says he is “disturbed” by Iran’s refusal to provide any information on Levinson. “I call on Iran’s leaders to tell us what they know about his whereabouts.”
December 2007 – Levinson’s wife, Christine, meets with government officials in Iran, but does not learn anything about her husband’s disappearance.
2008 – The CIA pays the Levinson family more than $2 million to head off a lawsuit, according to family attorney David McGee.
January 13, 2009 – During the nomination hearings of future Secretary of State Hillary Clinton, Senator Bill Nelson of Florida says, “Senator Clinton, you’ve already been briefed on this, but one of the things that you’re going to face is there is an American that is missing in Iran… I have gone to the Iranian Ambassador at the United Nations, who will see me even though his government will not allow him to talk to our UN Ambassador. He operates under the fiction that he will see me because I’m a representative of the people of the state of Florida. But the door has been closed at every turn. What I have said to him, and I speak through the lens of this Committee hearing, that out of human compassion this is a great opportunity for the country of Iran to crack the door, because we think he is being held by the Government of Iran in a secret prison in Iran. And if we want to have some renewed relations, this is a good first opportunity.”
March 3, 2011 – Secretary of State Hillary Clinton says that evidence is growing that Levinson is alive and being held somewhere in southwest Asia.
December 2011 – The Levinson family publicly releases a “proof of life” video they received in November 2010. In the video, Levinson says, “I have been treated well, but I need the help of the United States government to answer the requests of the group that has held me for three-and-a-half years. And please help me get home. Thirty-three years of service to the United States deserves something. Please help me.”
March 6, 2012 – The FBI offers a $1 million reward for information leading to his safe return.
September 2012 – Christine Levinson attempts to meet with Iranian President Mahmoud Ahmadinejad during the United Nations General Assembly in New York. He does not meet with her but tells CNN, “They told me (Levinson) was in Iran, and of course the question came up in my mind, what was an American intelligence officer doing in Iran…an individual is lost, how are we supposed to find him among 7 billion people spread across the globe? What we can do is assist, help and cooperate, which we have been doing, and we are doing… as a humanitarian gesture and action.”
January 2013 – The Levinson family releases a series of photographs they received in April 2011. In the photos, a bearded, shackled Levinson, wearing an orange jumpsuit, holds signs written in broken English.
September 2013 – CNN’s Christiane Amanpour interviews Iranian President Hassan Rouhani. When asked about Levinson, Rouhani says, “First, you mentioned a person that I’ve never heard of. Mr. Levinson, we don’t know where he is, who he is. Sometimes you are speaking of people who come before a court of trial and other times, there are people who disappear. It’s not a clear question to put these two categories side by side. He is an American who has disappeared. We have no news of him. We do not know where he is. We are willing to help and all the intelligence services in the region can come together to gather information about him to find his whereabouts. And we’re willing to cooperate on that.”
September 27, 2013 – US President Barack Obama speaks by phone with Iranian President Hassan Rouhani. One of the topics discussed is Levinson.

December 12, 2013 – The Associated Press and The Washington Post report that Levinson was working for the CIA when he disappeared in 2007, possibly investigating corruption among Iranian officials. The AP says it first learned of Levinson’s CIA ties in 2010 but delayed publishing the information at the government’s request. The next day the New York Times reports it has known of Levinson’s CIA work since 2007 but also delayed publishing the information to avoid jeopardizing his safety.

December 13, 2013 – White House Spokesman Jay Carney says Levinson “was not a US government employee when he went missing in Iran.”
December 15, 2013 – US Secretary of State John Kerry says, “Well, there hasn’t been progress in the sense that we don’t have him (Levinson) back. But to suggest that we’ve abandoned him or anybody has abandoned him is simply incorrect and not helpful. The fact is that I have personally raised the issue, not only at the highest level that I have been involved with, but also through other intermediaries.”
December 2013 – Dawud Salahuddin, the last person to acknowledge seeing Levinson, tells the Christian Science Monitor that both he and Levinson were detained by Iranian police on March 9, 2007. “They took me away, and when I left – we were down in the lobby – Levinson was surrounded by four Iranian police.”
January 21, 2014 – In an interview with CNN, Levinson’s family discloses that they have known for some time that he was working for the CIA. They accuse the US government of failing to do enough to find Levinson.
January 22, 2014 – Iranian Minister of Foreign Affairs Mohammad Javad Zarif tells CNN’s Jim Sciutto, “I have not seen anything that could prove that he (Levinson) was ever in Iran. In fact, we have seen evidence … he was last seen alive outside Iran, with pictures showing that he was outside Iran when he was last seen. It’s a very unfortunate case. We’ve said clearly that we have no knowledge of his whereabouts… We need the United States to explain for Iran what a CIA operative was doing, if he was ever in Iranian territory, what was he doing in Iranian territory.”

March 9, 2015 – The FBI increases the reward for information on Levinson to $5 million.

January 20 2016 – FBI investigators believe Robert Levinson, if he is still alive, is being held in Iran despite public statements from US officials in other agencies indicating he may be elsewhere, according to US officials briefed on the investigation. Three days earlier, on January 17, Iran had released four Americans in a prisoner swap, but not Levinson. After the swap, President Obama says that Iran has agreed to “deepen our coordination” in trying to locate the still-missing American.
February 11, 2016 – The Senate passes a resolution recognizing that Levinson is the longest held US civilian in US history and urging Iran to “act on its promises to assist in” his case.
March 21, 2017 – Levinson’s family files a suit against Iran with the US District Court in Washington D.C. They are filing suit under the Foreign Sovereign Immunities Act “for injuries suffered by each of them as a result of Iran’s unlawful acts of hostage taking, torture and other torts.”