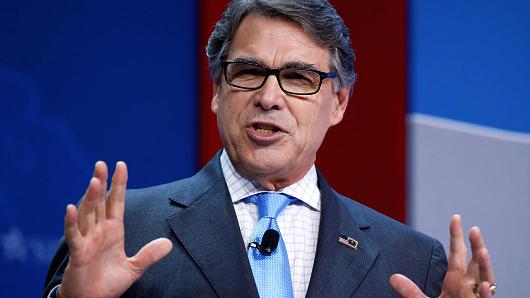 Energy Secretary Rick Perry said the US can achieve a new era of innovation only by casting aside the “energy pessimism” of past generations, mainly that the US cannot produce affordable, clean fossil fuels.

To be sure, many energy executives at the conference said the growth in U.S. energy production is poised to continue as the industry adopts technology like data analytics and machine learning. And there was widespread support for a White House seen as slowing the Obama administration’s expansion of energy-sector regulations.

But the prospect of President Donald Trump‘s anticipated tariffs on steel and aluminum have raised the hackles of many corners of the energy industry.

On Monday, ExxonMobil CEO Darren Woods told CNBC the tariffs could undo some of the positive impacts from GOP tax cuts and Trump’s deregulatory agenda. Siemens CEO Joseph Kaeser also voiced concerns when interviewed by CNBC at CERAWeek, though said the specific impact on Siemens business would be minor.

Pipeline players are particularly worried, given the reliance on foreign steel for many projects at a time when U.S. supply is booming. They warn that tariffs will raise costs and lead to a rush on U.S. metal supplies, potentially causing some projects to be delayed or canceled. Some analysts say tariffs will not have an outsized impact on the industry, because the price of raw steel is a relatively small part of overall costs.

ConocoPhillips CEO says investors are underweight energy, ‘by a lot’