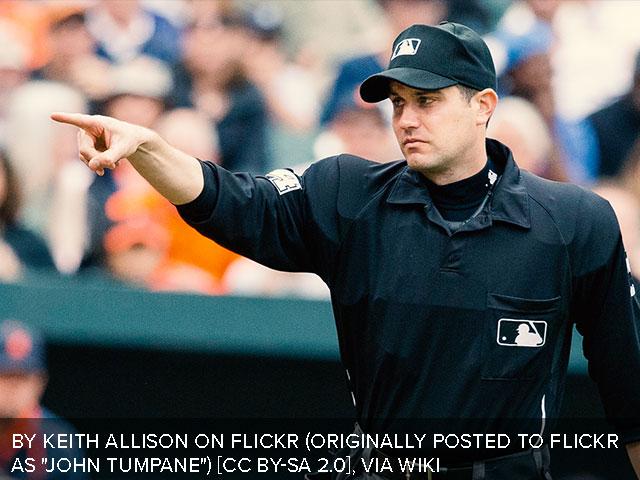 Umpires take a lot of heat for their calls – they get boos and jeers from angered sports fans on a regular basis.

But John Tumpane is an exception. He’s received a lot of praise for literally saving someone’s life.

The 34-year-old Major League Baseball (MLB) umpire stopped a woman from jumping off a bridge Wednesday according to a story in the Pittsburgh Post-Gazette.

Tumpane grabbed her after she went over the railing of the Roberto Clemento Bridge in Pittsburgh, Pensylvania. The bridge runs over the Allegheny river.

“You’ll forget me tomorrow,” she told him later on.

“I’ll never forget you,” Tumpane said. “You can have my promise on that.”

The woman tried to break his grip at one point, and put both her feet over the edge of the bridge. But Tumpane continued holding on.

Tumpane told someone to call 911.

Two others jumped in to help, holding the woman’s arms and ankles.

A firetruck, police boat, helicopter, and ambulance all finally came and the woman was pulled to safety.

“All these people are here. Look at all these people who want to help you. We’re all here for the right reasons. We want to get you better,” Tumpane recalls telling her.

“I told her ‘I didn’t forget her, and we’d be here, and she’s better off on this side than the other side.'” Tumpane said. “I just want her to know that.”

Tumpane says he had the chance to pray with her before paramedics took her away in an ambulance.

The woman was identified by a city official as a 23-year-old from Munhall, Pennsylvania.

The bridge is less than a mile from PNC Park, home of the Pittsburgh Pirates. Tumpane helped officiate a game between the Pirates and the Tampa Bay Rays there later that night.