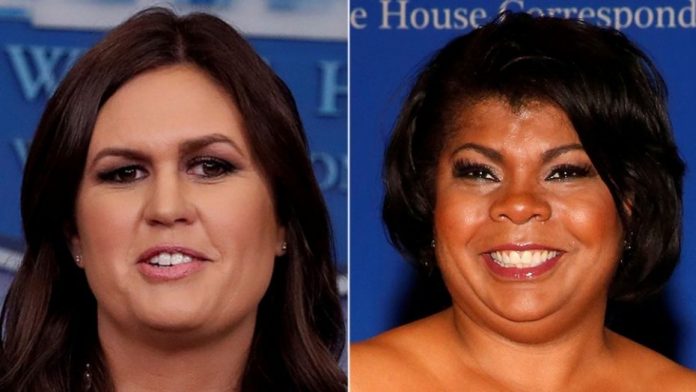 A reporter who demanded proof that White House Press Secretary Sarah Sanders actually baked a chocolate pecan pie for Thanksgiving has complained this week about not being invited to the White House media Christmas party.

April Ryan, Washington bureau chief for American Urban Radio Networks, told the Washington Post that she had “given up trying to figure out why” she wasn’t invited to Friday’s event, but noted President Donald Trump “has the right to invite whoever he wants. He chose not to invite me. I’m good.”

“I don’t think I was overlooked,” Ryan told the paper. “I think they don’t like me. For whatever reason, they have disdain for me.”

Over the Thanksgiving weekend, Ryan needled Sanders for the picture the press secretary posted of the pie, which was taken from overhead on a white background.

“Show it to us on a table,” Ryan tweeted, and the resulting social media furor was quickly dubbed “#PieGate.”

Away from social media, Ryan has repeatedly clashed with Sanders and Sanders’ predecessor Sean Spicer in the White House briefing room. Earlier this month, Sanders told Ryan she was “starting to regret calling on you first” during a back-and-forth about Trump’s use of Twitter.

On Tuesday, CNN announced it was boycotting the party “in light of the President’s continued attacks on freedom of the press …”

The network added that it would send a “reporting team” to the party to cover any news that develops from it. Sanders responded by tweeting, “Christmas comes early! Finally, good news from @CNN.”