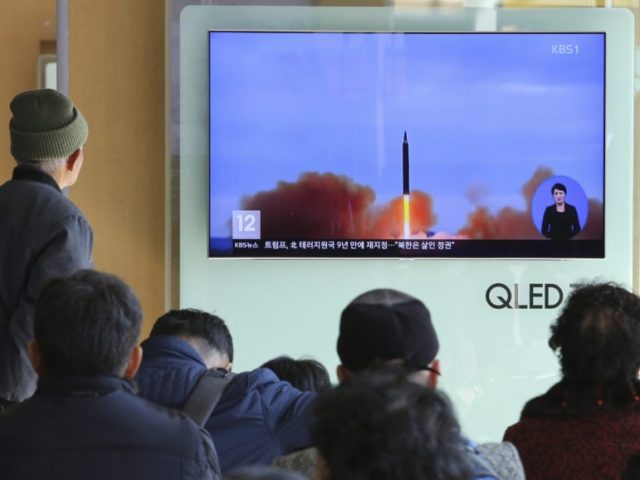 U.S. Defense Department Director of Press Operations Col. Rob Manning gave a brief statement on Tuesday afternoon: “At approximately 1:30 p.m EST we detected a probable missile launch from North Korea. We are in the process of assessing the situation and will provide additional details when available.”

North Korea’s missile program has been strangely quiet since September, which comes as a relief to Japan, since the last few ICBMs from North Korea have flown through their airspace. On Monday, the Japanese government reported intercepting radio signals that suggest North Korea may be preparing to launch another missile.

A Japanese government source told Reuters at the time, before the publication of the Yonhap news alert, that the intercepts are not seen as conclusive proof another test is coming, and satellites have not observed any new activity at North Korea’s usual test launch sites. However, the radio chatter was disturbing enough to put Japan on alert for a fresh launch.

“North Korea hasn’t been engaging in new nuclear or missile tests but recently we’ve seen them persistently testing engines and carrying out fuel tests. But we need some more time to see whether these are directly related to missile and nuclear tests,” South Korean Unification Minister Cho Myoung-gyon said on Tuesday.

Pentagon spokesman Col. Robert Manning was even more noncommittal, stating merely that diplomatic efforts “supported by military options” remained ongoing. American government sources told Reuters, in essence, that the U.S. military sees no convincing evidence of an imminent test, but would not be “surprised if such a test were to take place in the very near future.”

Unification Minister Cho also said on Tuesday that North Korea is moving at a “faster than expected pace” on nuclear weapons, and might be ready to announce it has functional nuclear missiles by the end of 2018.

“Experts think North Korea will take two to three more years but they are developing their nuclear capabilities faster than expected. We cannot rule out the possibility that Pyongyang may declare the completion of their nuclear program in a year,” said Cho.

Writing at Forbes, Middlebury Institute of International Studies research associate Shea Cotton postulates that North Korea’s missile launch pause is actually an annual slowdown that occurs in the fourth quarter of every year, which is harvest season for the perpetually starving communist dictatorship. In other words, missile testing slows down because the Kim regime has to divert its equipment, fuel, and manpower into gathering food. Even the soldiers stationed at North Korean military bases tend to become involved in harvesting food from the surrounding farmland.

“We tend to think of North Korea’s missile program as having the full backing of the regime and that it dumps unlimited resources into the program. While the former is probably true, the latter isn’t. The scarcity of resources within North Korea means the regime has to be extremely careful how it allocates them and this time of the year especially. After all, you can’t have a missile program if all your rocket scientists are near-starvation,” Cotton points out.

Under this theory, North Korea’s abrupt cessation of missile launches in September holds exaggerated significance because they were so active with provocative missile launches over the summer, and because the United States and South Korea have conducted so many missile exercises that would normally prompt Pyongyang to shoot off a few missiles as a show of defiance.

The possibility of new missile launches is alarming because North Korea is very close to perfecting nuclear missile technology, as Cho Myoung-gynon warned. The last few bits of technology they require, such as reentry shielding to protect the warheads on long-range missiles, will require a few launch tests to iron out. There is a very good chance the next round of North Korean launches will provide the data its scientists require to develop the weapons everyone in the civilized world has said they must never possess.