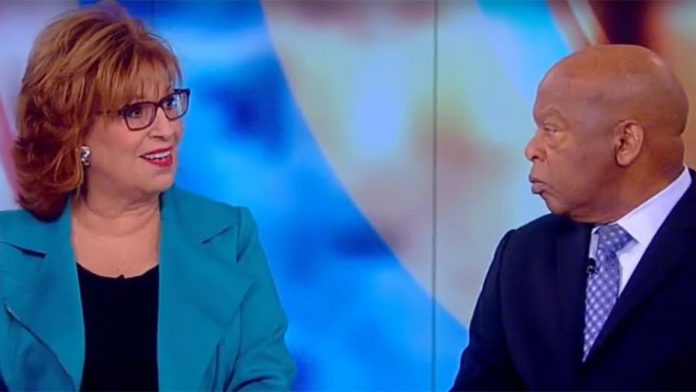 Rep. John Lewis told Joy Behar he ‘couldn’t be at home with myself’ if he attended Trump’s inauguration.

Rep. John Lewis, D-Ga., told ABC’s “The View” Monday that Donald Trump would not be president if Martin Luther King Jr. was still alive, adding that the civil rights leader “would have been able to lead us to a different place.”

The 77-year-old Lewis, himself a prominent leader in the 1960s civil rights movement, joined the panel on “The View” for an emotionally charged 10-minute segment to mark Martin Luther King Day.

Lewis reflected on his decision to skip what he called Trump’s “so-called inauguration” last year, saying that he “couldn’t be at home with myself if I had to participate or be part of it.”

“The movement taught us to withdraw from evil,” Lewis added, “and I never felt that [Trump’s] election was legitimate.”

“Yes, I’m with you on this,” panelist Joy Behar remarked.

Behar drew loud applause when she brought up Lewis’ non-attendance at the opening of a civil rights museum in Mississippi due to Trump’s presence.

Lewis also disagreed with King’s daughter, the Rev. Bernice King, who said that her father would have met with the president.

“Well, I knew her father very, very well,” said Lewis. “I think he would have took the same position that I took.”

In response to a question about the 50th anniversary of King’s assassination, which will be marked in April, Lewis said that America “has not been on the right path since” King’s killing.

“It’s been off since then,” Behar agreed. “We gotta get back on track.”