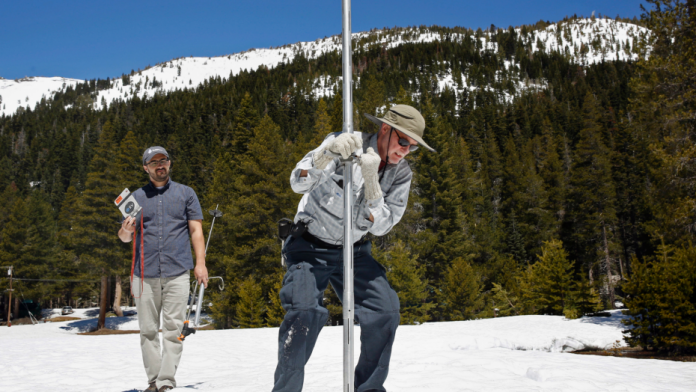 PHILLIPS STATION, Calif. –  It’s been almost a year since Los Angeles residents felt any real rain, and precious little snow is in the Sierras, but water managers say it’s too early for fears that California is sliding back into drought as abruptly as the state fell out of it.

Water officials carry out the first of their regular ritual winter snow measurements before news cameras on Wednesday. Plunging rods into snowpacks to measure the snow depth, water managers use the event to acquaint Californians with the state of the water supply. It’s a crucial question in a semi-arid state with the U.S.’s biggest state economy, agricultural industry and population. In a normal year, nearly two-thirds of Californians’ water supply starts as snow in the Sierras.

Southern California wildfires that grew to the biggest in state history in December — normally the rainy season in California — already have made clear the bottom line: The state is far drier than normal so far this winter.

“We’re back in the old waiting game,” said Doug Carlson, a spokesman for the state Department of Water Resources.

This year, meteorologists point to a strengthening La Nina weather pattern in the Pacific, which typically brings drier weather. A stubborn ridge of high pressure in the Pacific — the same bad guy during the state’s drought — is blocking storms from reaching Southern California in particular.

People in California’s southwest last felt any significant rain in February, the National Weather Service noted this week. Los Angeles is marking a record dry spell, with rainfall just 9 percent of normal for the past 10 months, the weather service said.

Snowpack in the Sierras, which supplies a steady flow of water in good years as the snow melts, stood Tuesday at one-fourth of normal for this point in the year.

It’s not time to despair, yet, Carlson said.

Last year’s copious rains have left reservoirs with plenty of water. And it’s early in the winter rainy season yet — California normally receives half its rain between December and February.

“Our message to the public as we begin to do our first snow survey…is it’s still very early in the season,” Carlson said. “Anything could happen.”