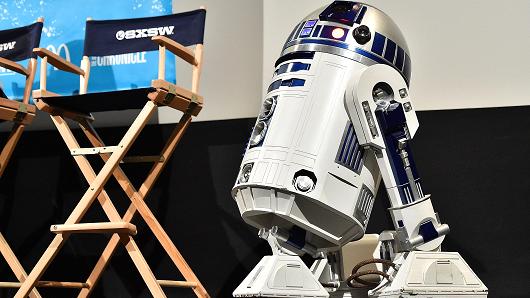 R2-D2 attends the screening of ‘Secrets of The Force Awakens: A Cinematic Journey’ during the 2016 SXSW Music, Film + Interactive Festival at Paramount Theatre on March 14, 2016 in Austin, Texas.

An R2-D2 droid that was used in several “Star Wars” films has sold at auction for nearly $3 million.

The auction house Profiles in History said the 43-inch tall unit that was compiled from parts used throughout filming of the original trilogy sold for $2.76 million at an auction Wednesday.

There was no information about who purchased the droid, which was the most expensive item offered in a movie memorabilia auction that included numerous props from the “Star Wars” franchise. Other items up for sale included Luke Skywalker’s lightsaber from the first two films, which sold for $450,000 and Darth Vader’s helmet from the original film sold for $96,000.

The Calabasas, California-based Profiles in History had estimated the droid could fetch up to $2 million before Wednesday’s sale.

Other space-themed film and television memorabilia was also for sale, with a collection of 23 ships from “Battlestar Galactica” and “Buck Rogers” sold for $1.8 million. A helmet worn by late actor Bill Paxton on the set of “Aliens” sold for $51,000.

Not all the items that sold were out of this world. The lighted dancefloor from “Saturday Night Fever” sold for $1.2 million.”