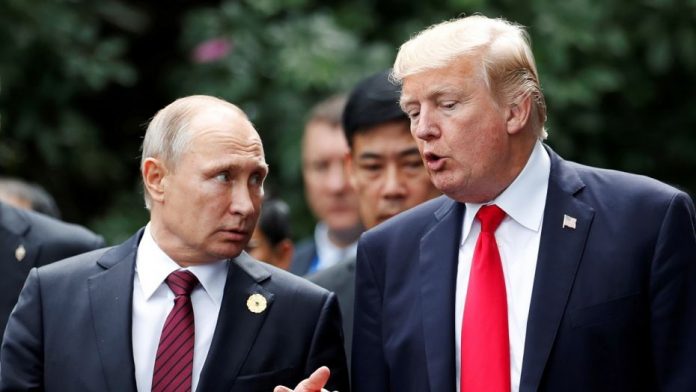 Accusations of collusion between the Trump administration and Russia have “been made up by Trump’s opponents to delegitimize Trump’s time in office,” Vladimir Putin said Thursday.

The tactic has had a negative impact on the U.S. political system, undermining Trump’s “serious achievements,” the Russian president said at his year-end news conference.

The annual sessions are legendary for their length – with the 2008 version lasting 4 hours and 40 minutes.

On Thursday, Putin seemed perplexed by the current political turmoil in the U.S.

“It really seems strange to me because it seems they don’t understand that they undermine their own nation, they limit the powers of the president,” he said.

Putin then slammed the accusations that his former ambassador to the U.S., Sergey Kislyak, had contact with Trump campaign officials during the 2016 U.S. presidential election.

“Is that banned? Why does it have to be turned into spy mania?” he asked the reporters.

Putin continued talking about the tainted relations between the two countries, noting that it was in the best interests of the Russian and American people to “normalize ties and work together” on common issues such as the Middle East and North Korea.

“It’s not up to me to assess Trump,” Putin replied. “That’s up to the American people.”

Putin acknowledged that Trump has made “serious achievements” during his time in office, citing the state of the U.S. economy, for one.

“With all respect to his critics, this is an objective fact,” he added.

But the news conference also featured a couple of criticisms aimed at the U.S. For instance, Putin slammed U.S. attitudes toward the New START treaty – a bilateral agreement aimed at reducing offensive arms.

“We won’t be dragged into an arms race,” he said.

He also criticized the U.S. government for pressuring state-funded TV channel RT – formerly Russia Today – to register as a “foreign agent” with the Justice Department.

“Where is the freedom of the media, one of the cornerstones of America?” he asked.