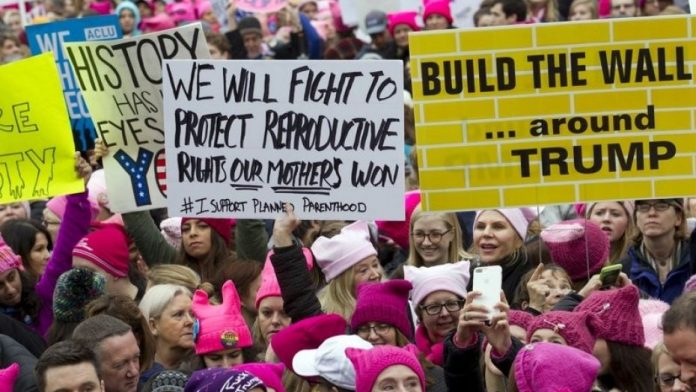 January 21, 2017: Women with bright pink hats known as the “pussy hats” gather for the Women’s March in Washington, DC.

Feminist activists say they are tossing out their famous pink “pussy hats” in an effort to be more inclusive and not to offend transgender women or women of color.

Phoebe Hopps, founder and president of Women’s March Michigan, said the movement is dropping the symbolic pink knitted hats with cat ears because they are discriminatory to women who do not have typically female genitalia or their genitals are simply of a different color.

“I personally won’t wear one because if it hurts even a few people’s feelings, then I don’t feel like it’s unifying,” Hopps told the Detroit Free Press. “I care more about mobilizing people to the polls than wearing one hat one day of the year.”

“I personally won’t wear one because if it hurts even a few people’s feelings, then I don’t feel like it’s unifying.”

She added: “It doesn’t sit well with a group of people that feel that the pink pussy hats are either vulgar, or they are upset that they might not include trans women or nonbinary women or maybe women whose (genitals) are not pink.”

The hats initially drew attention during the 2016 presidential campaign following the release of the infamous “Access Hollywood” tape in which then-candidate Donald Trump expressed lewd remarks about women.

The headwear soon gained a symbolic association with anti-Trump protests in the run-up to the Women’s March across the U.S., which was held Jan. 21 last year, the day after Trump was inaugurated.

The event attracted droves of activists who objected to Trump’s presidency.

Hopps is organizing anniversary marches, to be held this coming Jan. 21.

Multiple national and state organizations within the broader anti-Trump movement have attempted “to move away from the pussy hats for several months now” and no longer use the hats when promoting the events, she said.

LaShawn Erby, co-chair of a local Black Lives Matter chapter in Lansing, Mich., said she will use the anniversary to speak out about the discriminatory hat during her remarks. “I will say this one thing: It is a problem,” Erby told the newspaper.