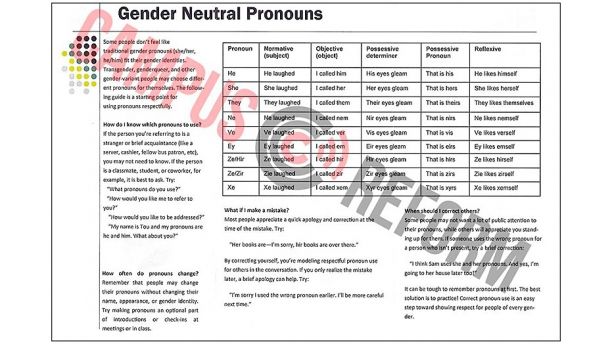 The LGBT Resource Center at a Georgia college may want to pay a visit to the English department after a new controversial pamphlet lists several gender pronouns as “ne,” “ve,” and “ey.”

The words are featured in a pamphlet titled “Pronouns Matter: A guide to using gender neutral pronouns” that administrators handed out in Kennesaw State University’s Student Center Tuesday, as reported by CampusReform.org.

Tammy Demel, a university spokesperson, told Fox News it was “made available by the Kennesaw State Office of Student Engagement for those in the campus community with questions or who had particular interest in this topic.”

Demel added, “There is no policy at Kennesaw State University requiring the use of gender neutral pronouns nor for the wide distribution of these materials.”

The pamphlet tells students to “understand a person’s pronouns can change; do not assume the preferred pronouns from yesterday will still apply today.”

Kennesaw State University in Georgia has a pamphlet that lists gender neutral pronouns as “ne,” “ve,” and “ey.”

Similarly, it reminds students that “people may change their pronouns without changing their name, appearance or gender identity.”

The guide suggests “making pronouns an optional part of introductions or check-ins at meetings or in class.”

Students are encouraged to ask their friends, classmates and co-workers how they choose to identify before making any assumptions. This is an “easy step toward showing respect for people of every gender,” according to the guide.

It also lists scenarios for situations in which students deploy the wrong pronoun. 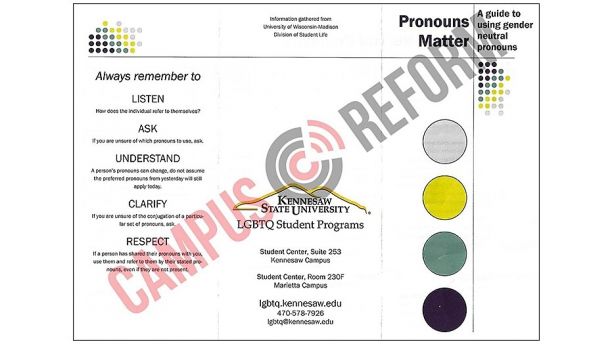 Kennesaw State University in Georgia has a pamphlet that lists gender neutral pronouns as “ne,” “ve,” and “ey.”

One example, which may cause more confusion than clarification, says, “Her books are – I’m sorry, hir books are over there.”

While the pamphlet lists nine different pronoun options, it is unclear how many may or may not actually exist.

The guide says information was gathered from the University of Wisconsin-Madison Division of Student Life.

A Kennesaw State freshman who alerted Campus Reform about the document harshly criticized it.

“It is a disgrace, because I thought that my school was one of the few schools left that weren’t teaching these things. But when I found this, I felt really disappointed,” he told Campus Reform. “Why is this university entertaining something as useless as this?”