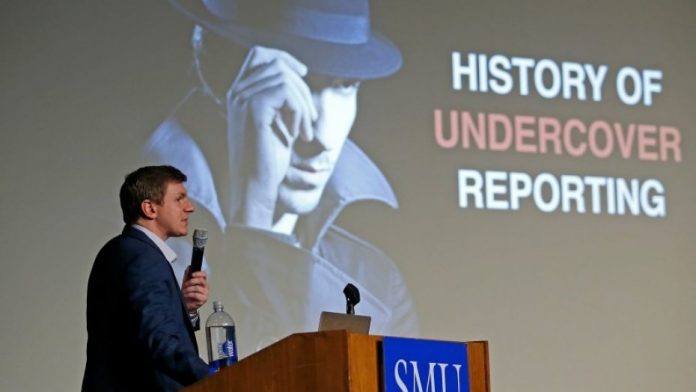 But in speaking to a crowd at the Southern Methodist University in Texas on Wednesday, O’Keefe dismissed the significance of the Post’s story chronicling the hoax.

“I don’t have an opinion on it, honestly. I can’t speak intelligently about it. The Washington Post seems to want a Nobel Prize for vetting a source correctly. Our work is sort of changing human nature and making people cautious,” he said.

Project Veritas has a history of using disguises and hidden cameras to uncover supposed liberal bias among reporters and left-leaning organzations. It has targeted groups ranging from Planned Parenthood, teachers’ unions, and most famously, the community organizing non-profit ACORN.

But the group has been criticized for selectively editing its videos in order to push a conservative narrative.

Most recently, the group was foiled Monday after it allegedly tried to convince Washington Post reporters that a woman named Jaime Phillips was impregnated at age 15 by Moore and was convinced to have an abortion.

The Washington Post reported on Wednesday that the efforts to infiltrate the paper dated back a few months. Phillips had been confronted by a Post reported about inconsistencies her testimony and was later seen entering Project Veritas’ offices in Mamaroneck, N.Y.

The Washington Post was the first news media organization to report accusations that Moore sought to date teenage girls while in his early 30s. The allegations have rocked the special election campaign for the Senate seat in Alabama.

O’Keefe admitted that his group was behind the hoax aimed at the Post, saying “our cover was blown.”

O’Keefe said in an interview with AP that Monday’s failed attempt was part of a broader project to use deception as a means to gain access to news organizations including the Washington Post, the New York Times, and CNN, among others.

“If we’re doing something on The Washington Post, it’s in the context of getting them on tape to tell the truth and to admit either their biases or how the paper works or how honest they are,” he said.

Another O’Keefe project led to the demise of ACORN, a community organizing group that O’Keefe negatively portrayed via hidden camera videos. He corded with a hidden video camera as he brought a young woman posing as a prostitute to the group’s offices. O’Keefe later agreed to pay $100,000 to settle a lawsuit based on the ACORN incident.