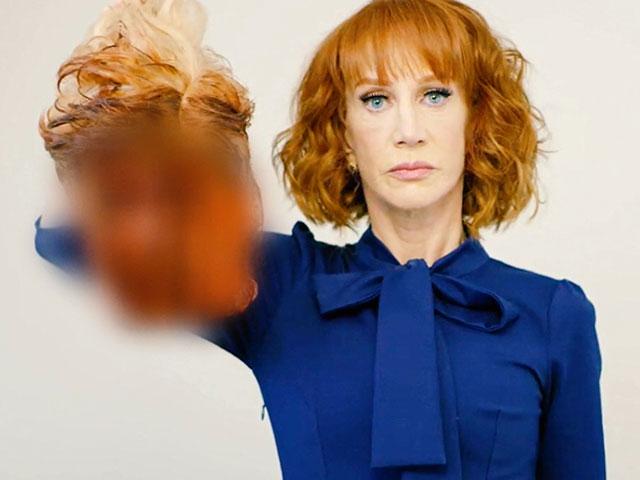 President Donald Trump is responding to comedian Kathy Griffin, who released a graphic and disturbing image Tuesday of the president’s severed head in a video.

“Kathy Griffin should be ashamed of herself,” Trump tweeted. “My children, especially my 11-year-old son, Barron, are having a hard time with this. Sick!”

Kathy Griffin should be ashamed of herself. My children, especially my 11 year old son, Barron, are having a hard time with this. Sick!

Griffin later apologized in a video message and admits she took it too far.

“I sincerely apologize. I am just now seeing the reaction to these images,” she said. “I am a comic; I crossed the line. I move the line and then I cross it. I went way too far. The image is too disturbing. I understand how it offends people. It was not funny. I get it.”

Griffin said she is asking celebrity photographer Tyler Shields to take down the photo.

“I beg for your forgiveness. I went too far,” she said. “I made a mistake and I was wrong.”

Griffin received a significant amount of backlash from both conservative and liberals.

Donald Trump Jr., the president’s son, called the photo “disgusting but not surprising.”

Disgusting but not surprising. This is the left today. They consider this acceptable. Imagine a conservative did this to Obama as POTUS? https://t.co/QdghcbIjS7

CNN television personality, Anderson Cooper, took to Twitter to express his disapproval of the gory photo.

For the record, I am appalled by the photo shoot Kathy Griffin took part in. It is clearly disgusting and completely inappropriate.

Chelsea Clinton, the daughter of Hillary Clinton, called the image “vile and wrong.”

“It’s never funny to joke about killing a president,” she said.

This is vile and wrong. It is never funny to joke about killing a president. https://t.co/zIiuKoMyFw

Clinton is not the only one who has accused Griffin of inciting violence.

According to CNN, Griffin responded to the accusations. “OBVIOUSLY, I do not condone ANY violence by my fans or others to anyone, ever!” Griffin initially wrote on Twitter. “I’m merely mocking the Mocker in Chief.”

CNN and a small business are placing some distance between themselves and the celebrity.

Squatty Potty, a small family business that designs bathroom products, has announced they will pull their newly formed ad campaign with Griffin.

“We were shocked and disappointed to learn about the image Ms. Griffin shared today. It was deeply inappropriate and runs contrary to the core values our company stands for,” CEO Bobby Edwards wrote in a statement sent to Fox News.

“In response, Squatty Potty has suspended its ad campaign featuring Ms. Griffin. We have acted swiftly and decisively to demonstrate our commitment to a culture of decency, civility, and tolerance,” Edwards added.

Griffin is scheduled to host CNN’s New Year’s Eve coverage. The news organization told Entertainment Weekly they are “evaluating” whether she will continue to participate in the network’s annual event. She has co-hosted the show with Anderson Cooper for the last 10 years.

“We found what she did disgusting and offensive,” a CNN spokesperson said in a statement. “We are pleased to see she has apologized and asked that the photos be taken down. We are evaluating New Year’s Eve and have made no decisions at this point.”