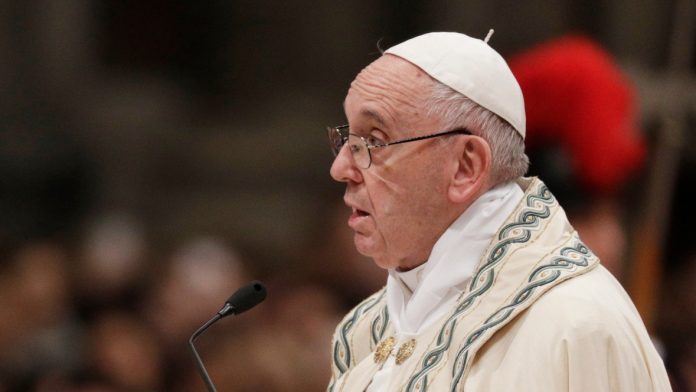 Bidding 2017 farewell, Pope Francis on Sunday decried wars, injustices, social and environmental degradation and other man-made ills which he said spoiled the year.

Francis presided at a New Year’s Eve prayer service at St. Peter’s Basilica, a traditional occasion to say thanks in each year’s last hours.

In his homily, the Pope said God gave to us a “whole and sound” year, but “we humans in so many ways ruined and hurt it with works of death, with lies and injustices.”

“The wars are the flagrant sign of this repeated and absurd pride,” he said. “But so are all the little and big offences against life, truth, brotherhood, that cause multiple forms of human, social and environmental degradation.”

Francis added: “We want to, and must assume, before God, our brothers and creation our responsibility” for the harm.

During these days let us give space to attitudes and gestures that favour peace.

Despite the gloom, Francis said “gratitude prevails” thanks to those who “co-operate silently for the common good.” He singled out parents and educators who try to raise young people with a sense of responsible ethics.

After the solemn basilica service, Francis strolled outside, briskly crisscrossing St. Peter’s Square to shake hands and banter with well-wishers, and kiss babies held by some of the thousands of faithful who waited for hours for a glimpse of him.

The evening was warm, and Francis went without the white coat that an aide carried for him. During his nearly hour-long walkabout outdoors, he stopped to admire a life-sized nativity scene in the middle of the square.

In keeping with past practice, on New Year’s Day, the Pope will celebrate mass dedicated to the theme of world peace.