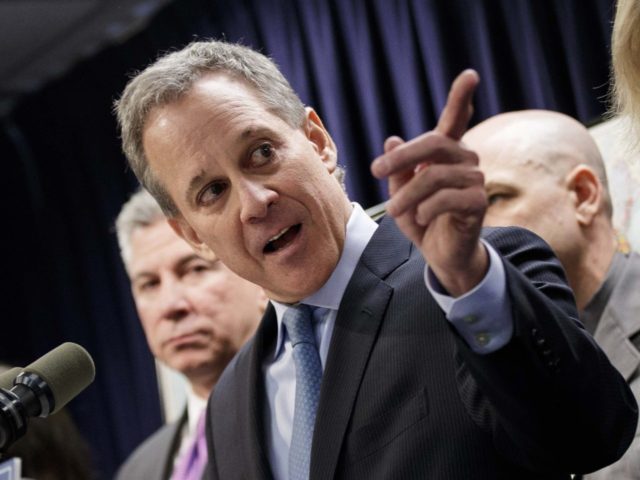 Special Counsel Robert Mueller is reported to be working with New York Attorney General Eric Schneiderman on his inquiry into alleged Russian interference in the 2016 presidential race.

If the report, first published in Politico, is true, it would be the latest fact undermining the integrity and impartiality of Mueller’s inquiry, which Democrats hope will result in the president being impeached and the results of the 2016 election forever called into question.

Mueller has already hired Democrat donors and an attorney who worked for the Clinton Foundation. Schneiderman is one of the most partisan state attorneys general, and has been one of President Trump’s most vociferous public opponents. He helped lead the fight against Trump’s executive order suspending travel from terror-prone countries, calling it “just a Muslim ban by another name.” He also sued Trump for fraud in the Trump University case, and announced in 2016 — during the height of the presidential campaign — that he was investigating Trump’s charities.

USA Today noted at the time that Schneiderman and Trump “have been involved in a years-long public feud.” In April, Schneiderman reportedly hired a liberal, Bernie Sanders-linked consulting group to help generate lawsuits against the Trump administration. Schneiderman also has a history of politically-charged litigation, including an effort to cover up emails that former Attorney General Eliot Spitzer sent from a private account while in office.

There could not be a more inappropriate person to be seen working with Mueller in an investigation that is already viewed as a politically-motivated effort to undo the results of a democratic election.

Joel B. Pollak is Senior Editor-at-Large at Breitbart News. He was named one of the “most influential” people in news media in 2016. He is the co-author of How Trump Won: The Inside Story of a Revolution, is available from Regnery. Follow him on Twitter at @joelpollak.