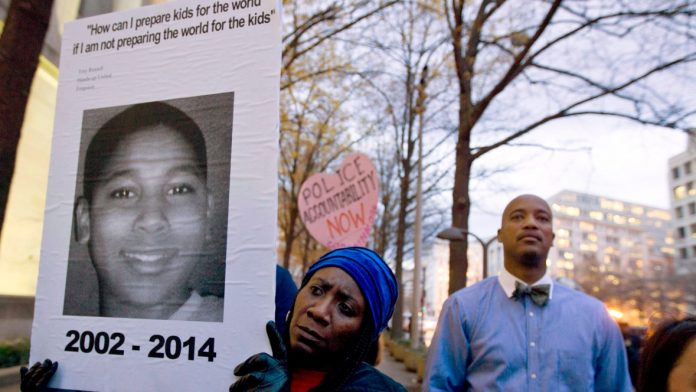 The police officer who shot and killed 12-year-old Tamir Rice was fired by the city of Cleveland on Tuesday, and the officer who drove the patrol car the day of the November 2014 shooting was suspended.

Police Chief Calvin Williams announced the discipline against officers Timothy Loehmann and Frank Garmback, who were involved in the fatal shooting of the boy at a recreation centre as he held a pellet gun.

Loehmann, who shot Rice, was fired not for something related to the shooting, but because of inaccuracies on his application form, Williams said.

A disciplinary letter against Loehmann has previously cited his failure to reveal during the Cleveland police application process that a suburban department allowed him to resign instead of being fired at the end of a six-month probationary period.

Garmback, who was driving the cruiser that skidded to a stop near the boy, has been suspended for 10 days for violating a tactical rule for his driving that day.

A discipline letter against Garmback has cited him for driving too close to Rice. Video of the shooting shows the patrol car skidding to a stop just feet from the boy.

Earlier this year, the 911 dispatcher who took the call that led to the shooting was suspended for eight days for failing to tell the dispatcher who sent the officers to the rec centre that the man who called 911 about “a guy” pointing a gun at people also said it could be a juvenile and the gun might be a “fake.”

A grand jury declined to file indictments in the case in late 2015.