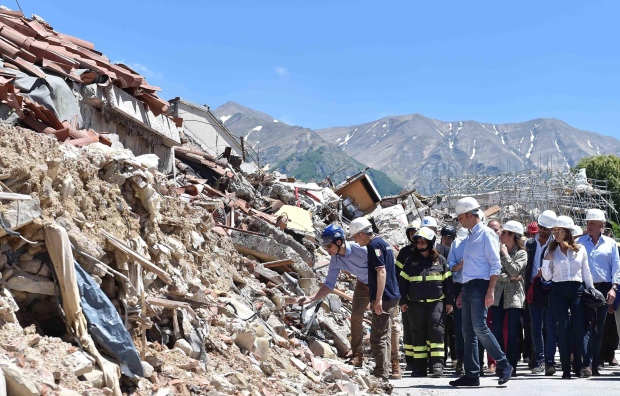 ​Prime Minister Justin Trudeau arrived at the Vatican on Monday with plans to raise reconciliation with indigenous peoples, the global fight against climate change and the importance of religious and cultural diversity during a meeting with Pope Francis.

He will also ask the pontiff to issue a formal apology in Canada for the role of the Catholic Church in the residential school system.

The Truth and Reconciliation Commission included the demand for a papal apology — to survivors, their families and communities — among the 94 recommendations in its report on the dark history and legacy of residential schools.

The Liberal government has promised to act on all of them.

Some Vatican shots as we wait for PMJT to finish meeting with the Pope. pic.twitter.com/UUKMW7vDc0

Trudeau, who is religious, is also expected to discuss the Catholic community in Canada.

Trudeau, in Rome this week following his participation at the NATO and G7 summits, wants to promote trade and other ties with Italy, including the Comprehensive Economic and Trade Agreement (CETA) between Canada and the European Union.

Monday morning, the prime minister will also take part in an event with the soccer team, A.S. Roma.

His wife, Sophie Gregoire Trudeau, has joined him on this part of the trip and the couple were to celebrate their wedding anniversary with a private dinner in Rome on Sunday evening.

On Sunday, Trudeau appealed to the heart of the country by visiting Amatrice, a tiny town still struggling to recover from a devastating earthquake.

“It’s an opportunity to share our thoughts, our condolences, our sympathies, but also demonstrate our resolve to accompany our friends in this difficult time,” Trudeau said Sunday as he stood below a clock tower, the only structure standing on a street lined with rubble.

That clock is stopped at 3:36 — the time in the morning the 6.2-magnitude quake hit the area in central Italy about 100 kilometres northeast of Rome on August 24, 2016. Some 300 people were killed, including one Canadian.

Many of them were children, and signs of their presence, including an illustrated cloth book and a inflatable pool toy, could be seen among the rocks, dust and other rubble piled high.

Efforts to rebuild the town, which includes many heritage buildings from medieval times, have been moving slowly.

The Italian-Canadian community has been trying to bring more attention to that fact, raising money to help pay for things like medical vehicles needed to navigate the mountainous terrain.

Former prime minister Stephen Harper, who issued a residential schools apology on behalf of the Canadian government in 2008, did not raise the issue directly during a 10-minute audience with Pope Francis two years ago. Harper did mention the report of the Truth and Reconciliation Commission.

In 2009, the previous pope, Benedict XVI, did express “sorrow” on behalf of the Catholic Church for the “deplorable conduct” by some members of the church in their treatment of indigenous children in residential schools.

The Truth and Reconciliation Commission report said this did not go far enough, especially since it was not made in public.