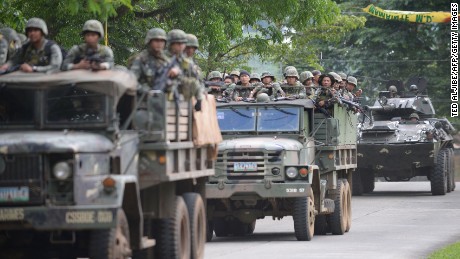 Local resident Chico Usman said the militants had entered the predominantly Muslim city of some 200,000 suddenly, on the afternoon of May 24, wearing masks and carrying assault rifles. “Everybody was shocked and ran into their houses,” he said, adding they could hear gunfire and fighting until the following morning.

Black ISIS flags emblazoned in white with the words “There is no god but God” were flying from “every corner in the city,” said Usman, who spoke to CNN from near Saguiaran, a town outside Marawi, where thousands of fleeing residents had taken temporary shelter.

In a separate incident, eight other people — thought to be fleeing the city — were found dead in a ravine. Witnesses said the victims were asked to recite Muslim prayers, according to CNN Philippines. Those who failed were taken by the armed men. The Philippines is a predominantly Catholic country but Mindanao has a significant Muslim population.

Philippine marines aboard their vehicles maneuver through a street on their way to an assault on the hide out of Muslim militants near the town center in Marawi, in southern island of Mindanao on May 28, 2017.

The latest violence flared up on May 23, after the military launched an operation targeting Isnilon Hapilon, a Filipino militant leader, who was last year designated ISIS emir for Southeast Asia.

Surrounded and fearing capture, Hapilon is thought to have issued an emergency call for reinforcements from members of the Maute group, a local Islamist militant organization that’s pledged allegiance to ISIS, who poured into Marawi by the hundreds, setting fire to buildings, taking hostages and entering into running street-battles with government forces as they came.

While Islamist and criminal groups have been active in the lawless tri-border area between the Philippines, Malaysia and Indonesia for years, such an audacious and aggressive attack on government troops by fighters loyal to ISIS has shocked many observers — and increased fears the group is succeeding in extending its influence into Southeast Asia.

“What’s happening in Mindanao is no longer a rebellion of Filipino citizens. It has transmogrified into invasion by foreign terrorists,” said Philippines Solicitor General Jose Calida during a press briefing last week. “They want to create Mindanao as part of the caliphate.”
While ISIS has yet to declare a wilayah — or state — of the caliphate in Southeast Asia as it has done in Libya and Saudi Arabia, many analysts believe it is merely a matter of time.
The influence of ISIS has spread throughout Southeast Asia in recent years, with more than 60 groups in the region pledging allegiance to self-declared caliph Abu Bakr al-Baghdadi, according to Rohan Gunaratna, head of the Singapore-based International Centre for Political Violence and Terrorism Research (ICPVTR).

Maute group militants display the flag of the so-called Islamic State in Marawi, Philippines on May 24, 2017.

Last week’s suicide attacks in the Indonesian capital of Jakarta, which claimed the lives of three police officers, is a case in point. Though carried out by Indonesian nationals, Jakarta police suspect the attacks are linked to ISIS.
While in Malaysia, six suspected militants — including a alleged ISIS arms smuggler — were picked up in special operation by the country’s Counter Terrorism Division last week. Other recent attacks throughout the region, including last year’s grenade blast in a bar near Kuala Lumpur, have also been attributed to the terror network.
Ties between the Philippines-based groups, which have led much of violence in recent years, and their counterparts in Indonesia and Malaysia are also growing. In April this year, a Philippines military strike on suspected ISIS-affiliated Maute militants in the Lanao del Sur province of Mindanao, killed 37, including three Indonesians and one Malaysian who were believed to be members of Jemaah Islamiyah — an Indonesia-based terror group.

According to Otso Iho, a senior analyst at Jane’s Terrorism and Insurgency Center, increased cooperation between groups is a significant step towards “generating a much more unified Islamist front particularly in the southern Philippines.”

A report by the Jakarta-based Institute for Policy Analysis of Conflict (IPAC), however, noted that while ISIS “has deepened cooperation among extremist groups in Southeast Asia,” law enforcement and counter terrorist efforts remain largely national.

Residents of Marawi in the southern Philippines flee the city as government forces and ISIS militants clash.

If action is not taken, they said, the region risks becoming a Southeast Asian version of the tribal areas along the border of Afghanistan and Pakistan.

Risks to which Mindanao is particularly vulnerable.

The southernmost island in the Philippines, Mindanao has long been plagued by conflict, with the region experiencing Communist insurgencies, nationalist rebellions, and brutal military crackdowns launched from Manila.

According to the United Nations World Food Program, outbreaks of conflict in 2000 and 2008 “each led to the displacement of nearly a million individuals.”

This instability, combined with the porous maritime borders between the Philippines, Malaysia and Indonesia that make it easy for groups to flee any crackdowns, has helped to establish the area an ideal hideout for drug smugglers, pirates, kidnap-for-cash groups, and increasingly, terrorists from across the region.

In a 2016 video circulated online, armed men — most appearing no older than teenagers — stand holding assault rifles and other weapons, as Arabic music plays in the background. They join their hands and pledge allegiance to Abu Bakr al-Baghdadi, the self-declared caliph of the Islamic State.

Later in the video, a Malaysian fighter urges viewers who cannot travel to the Middle East to go instead “to the Philippines.” He then joins two other fighters — identified as Filipino and Indonesian — in beheading three Christian captives.

Bearing the trademark high production values and gruesome executions of the core ISIS propaganda wing, the video represented the growing importance of Southeast Asia to the group’s leaders in Syria. Recent issues of Rumiyah — a monthly propaganda magazine published by ISIS in multiple languages — have also highlighted actions by Islamic State fighters against the “Filipino Crusader army” in the region.

According to researchers at ICPVTR in Singapore, ISIS has formed Katibah Al-Muhajir — the Brigade of the Migrant — to organize fighters in Southeast Asia.

Philippine marines take their position as they begin an assault on Muslim militants near the city hall in Marawi, in southern island of Mindanao on May 28, 2017.

“For approximately 500 Malaysian Ringgit, a prospective foreign jihadist can secure his travel arrangements, from Malaysia to the Philippines, and be given a complimentary weapon,” analysts Singh and Bin Jani wrote in their report last year. This brigade is under the command of Hapilon.
A skinny, baby-faced 51-year-old, Hapilon is originally from Basilan, an island in the southern part of Mindanao in the Sulu archipelago, according to the FBI.
The militant leader, who first came to prominence as the commander of the Abu Sayyaf terrorist group, has a long rap sheet — including a series of high-profile kidnappings-for-ransom of foreign nationals in the southern Philippines.

He was endorsed by ISIS as the emir for Southeast Asia in 2016, according to IPAC despite the fact he speaks “neither Arabic nor English, and his religious knowledge is limited.”

His stature — as confirmed by the Maute group’s coming to his aid, along with a $5 million US government bounty for information that would lead to his capture or conviction — is likely based on his ties to foreign jihadis and other ISIS-linked groups in the region, IPAC said in the report last year.

Members of Philippine police special forces maneuver as they launch an assault on Muslim militants near the city hall in Marawi on May 28, 2017.

Regional cooperation in combating militants such as Hapilon may become more important than ever before, as experts predict loss of land in Syria and Iraq will see ISIS leadership turn more attention to the southern Philippines.

Whether because they are sent there by al Baghdadi, or because they are fleeing Syrians and Kurds and other fronts, there are hundreds of local Southeast Asian fighters poised to bring their expertise and ideological commitment to the region.

According to a report by the Carnegie Council, up to “1,000 Southeast Asians may have traveled to ISIS-controlled territory in the Middle East.” Though such numbers are unconfirmed, multiple regional officials have expressed alarm at the lack of transnational programs and strategies in place to deal with potential returnees.

Australian Attorney General George Brandis who is a strong proponent of a more joined-up approach — and who recently labeled the security threat of returning fighters as among the “greatest in the region” — has said the matter would be discussed at an upcoming meeting of Asian security ministers later this year.

“Governments in the region have to constantly be vigilant against the threat of the returnees,” said Singapore-based analyst Bin Jani.

Along with the hundreds of fighters in the Middle East known to authorities, there are many more who are not being tracked, Bin Jani said, “militants can be very unassuming when they’re not carrying their guns.”