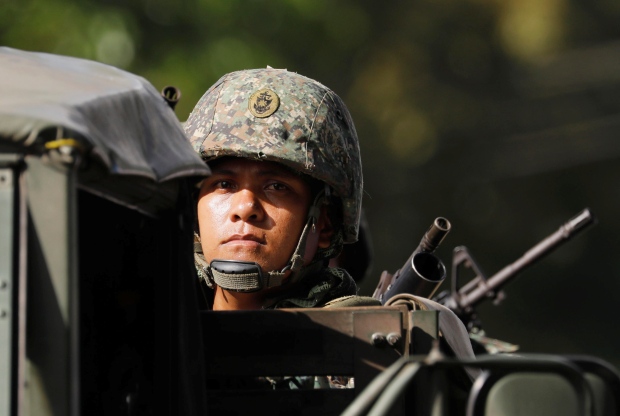 Philippine forces now control most of a southern city where militants linked to the Islamic State in Iraq and Syria group launched a bloody siege nearly a week ago, authorities said Monday.

Only small areas of Marawi are under militants’ control after six days of fighting, said Brig. Gen. Restituto Padilla, the military spokesman. In recent days, gunmen have managed to fend off attack helicopters, armoured vehicles and scores of soldiers.

About 100 people have died in the violence, including some civilians, although authorities were still trying to assess the scope of the bloodshed.

“We can control who comes in and who comes out, who moves around and who doesn’t, and we are trying to isolate these pockets of resistance that have remained,” Padilla said.

The crisis in Marawi, home to some 200,000 people, has raised fears that extremism is growing in the southern Philippines as smaller militant groups unify and align themselves with ISIS.

On Sunday, Philippine forces said they found corpses in the streets, including at least eight civilians who appeared to have been executed by militants.

A member of Philippine Marines holds a weapon aboard a vehicle as more soldiers reinforce the fight in the southern Philippines. The violence prompted President Rodrigo Duterte last week to declare 60 days of martial law. (Erik De Castro/Reuters)

The violence prompted President Rodrigo Duterte last week to declare 60 days of martial law in the southern Philippines, where a Muslim separatist rebellion has raged for decades.

Padilla said Sunday that combat operations were still going on, but that the militants were weakening.

‘Low on ammunition and food’

“We believe they’re now low on ammunition and food,” he said, speaking by phone from Manila, the capital. “Compared to the initial days, there has been increasingly less resistance from the militants within Marawi.”

Padilla said the bodies of four men, three women and a child were found near a road close to Mindanao State University in Marawi. 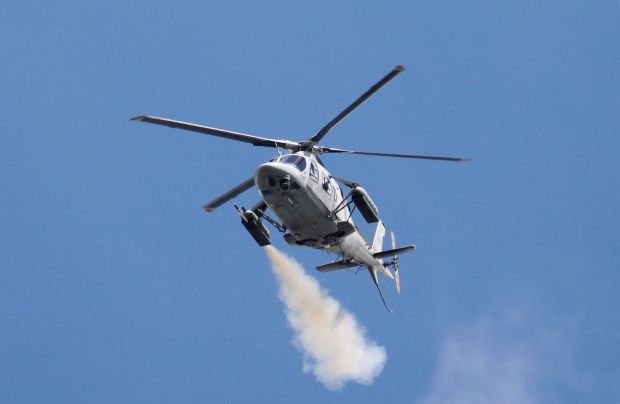 A Philippine attack helicopter fires a rocket at the Maute group in Marawi in the southern Philippines. The Maute has a heavy presence in Marawi and has been instrumental in fighting off government forces in the current battles. (Erik De Castro/Reuters)

Eight other men were found gunned down and thrown into a shallow ravine early Sunday in Marawi’s Emi village, said police officer Jamail Mangadang. A paper sign attached to one of the men indicated that the victims had “betrayed their faith,” he said, identifying the men as civilians.

Marawi is a mostly Muslim city.

In addition to the civilian deaths, Padilla said 61 militants, 11 soldiers and four police were among the dead.

The violence erupted last Tuesday night when the government launched a raid to capture Isnilon Hapilon, who is on Washington’s list of most-wanted terrorists. But the operation went awry and militants rampaged through the city, torching buildings and battling government forces in the streets. 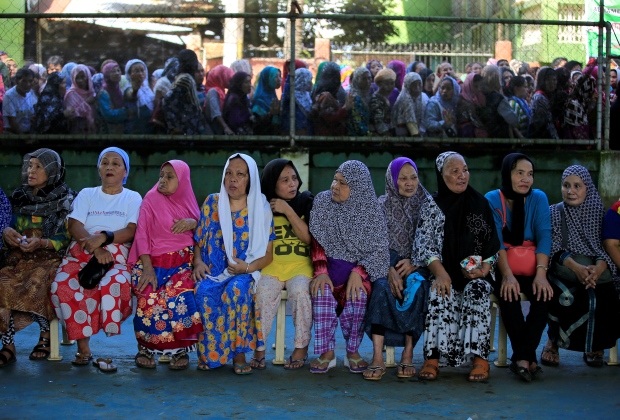 Evacuees wait for a distribution of relief goods in a evacuation centre at Baloi, Lanao Del Norte, Philippines. (Romeo Ranoco/Reuters)

A priest and several worshippers were taken hostage. There was no word on their condition.

Hapilon, an Islamic preacher, was once a commander of the Abu Sayyaf militant group who pledged allegiance to ISIS in 2014. He now heads an alliance of at least 10 smaller militant groups, including the Maute, which has a heavy presence in Marawi and has been instrumental in fighting off government forces in the current battles.

All of the groups are inspired by ISIS. Defence Secretary Delfin Lorenzana told reporters that Hapilon has received funds from the group.

Washington has offered a $5-million reward for information leading to Hapilon’s capture.