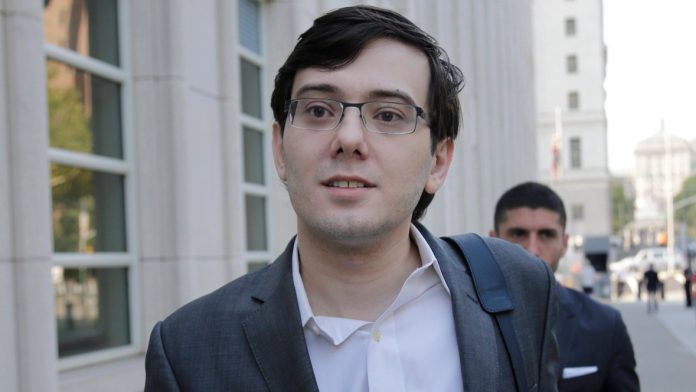 U.S. District Judge Kiyo Matsumoto handed down the sentence in a federal court in New York.

Prior to the judge announcing her decision, Shkreli cried in court as he apologized for defrauding investors.

Shkreli, his cocky persona nowhere to be found, cried as he told Matsumoto he made many mistakes and apologized to investors. He was convicted of securities fraud last year for defrauding investors in two failed hedge funds.

He said he is the only person to blame — not the media, not the government, nor his business partners — and that he hopes to make amends and learn from his mistakes.

“I’m not the same person I was. I know right from wrong. I know what it means to tell the truth and what it means to lie,” he said, before apologizing to his investors. “I am terribly sorry I lost your trust. You deserve far better.”

Attorney Benjamin Brafman argued for Matsumoto to sentence the former pharmaceutical company CEO known for trolling critics on the internet to 18 months in prison.

Assistant U.S. Attorney Jacquelyn Kasulis argued that he deserves 15 years in prison not because he is “the most hated man in America,” but because he is a criminal convicted of serious fraud.

She said the judge must also consider the history and characteristics of the defendant, and said that Shkreli has “no respect whatsoever” for the law, or the court proceedings.

“I also want to make clear that Mr. Shkreli is not a child,” Kasulis said. “Mr. Shkreli is about to turn 35 years old, he’s a man. He’s not a teenager who just needs some mentoring. He is a man who needs to take responsibility for his actions.”

Matsumoto assured Brafman she would not take into consideration the circus outside the courtroom.

“Whatever adverse media attention he has brought upon himself with his online presence is … not before me,” she said.

Matsumoto ruled earlier this week that Shkreli would have to forfeit more than $7.3 million in a brokerage account and personal assets including his one-of-a-kind Wu-Tang Clan album that he boasted he bought for $2 million. The judge said the property would not be seized until Shkreli had a chance to appeal.

Shkreli, 34, became notorious for raising the price of a lifesaving drug by 5,000 per cent and trolling critics on the internet with his snarky “Pharma Bro” persona.

To make its case for leniency, the defence asked the judge to consider several letters from Shkreli and his supporters, which included professionals he worked with who vouched for his credentials as a self-made contributor to pharmaceutical advances.

Other testimonials were as quirky as the defendant himself. One woman described how she became an avid follower of Shkreli’s social media commentary about science, the pharmaceutical industry, but mostly, about himself. She suggested that those who were annoyed by it were missing the point.

“I really appreciate the social media output, which I see on par with some form of performance art,” she wrote.