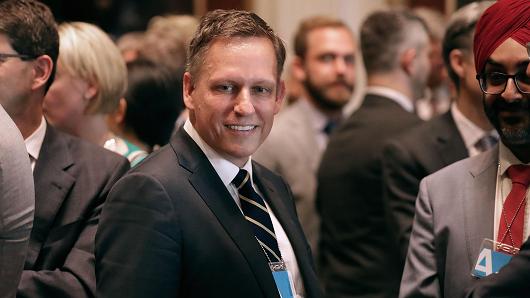 Venture capitalist Peter Thiel of the Founders Fund and other technology executives and leaders attend the inaugural meeting of the American Technology Council in the Indian Treaty Room at the Eisenhower Executive Office Building next door to the White House June 19, 2017 in Washington, DC.

Peter Thiel has connections across Silicon Valley thanks to ties he forged as co-founder and CEO of payments company PayPal more than 15 years ago.

But a new report from a Stanford University student news site points to a bigger and more powerful Thiel network — one that dates back to his days as a college student in 1987.

As an undergraduate at Stanford, Thiel co-founded a libertarian newspaper called the Stanford Review. According to a story in the latest issue of Stanford Politics, a rival publication, some 23 former editors or staffers from Thiel’s paper are connected to data analytics start-up Palantir, either as a current or former employee or board member.

The secretive software company in Palo Alto, California, near the Stanford campus, is valued at $20 billion.

Palantir has done work with more than a dozen U.S. federal agencies, including the Department of Defense, the NSA and the CIA, whose venture arm was among the company’s earliest investors. Palantir’s technology gathers information from public and private databases and examines it to find patterns and anomalies that can prove useful to its clients.