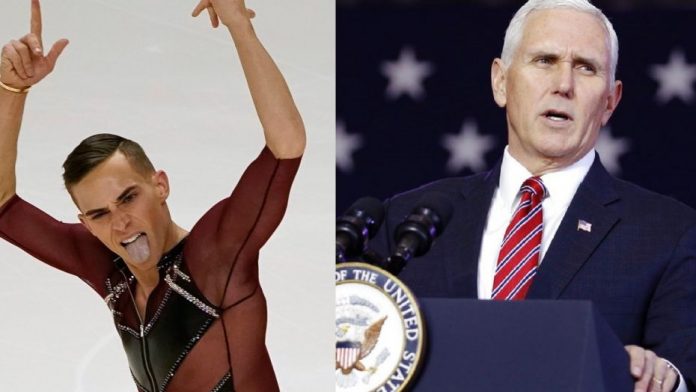 Rippon, who is believed to be the first openly gay man to compete for the U.S. at a Winter Olympics, took aim at Pence in January for what the skater said were the vice president’s anti-gay views.

The Olympian also pointedly refused an invitation to meet with Pence, USA Today reported, although the vice president’s office denied that Pence had sought to meet one-on-one with Rippon.

“You mean Mike Pence, the same Mike Pence that funded gay conversion therapy?” the figure skater told USA Today when informed he might be able to meet with Pence when he arrived at the Games in South Korea. “I’m not buying it.”

During his successful 2000 congressional run in Indiana, Pence’s website stated his support for directing resources “toward those institutions which provide assistance to those seeking to change their sexual behavior” – a plank that some critics have said referred to conversion therapy, rather than safer sex practices.

On Wednesday, Pence seemed to take aim at that story.

“Headed to the Olympics to cheer on #TeamUSA,” Pence tweeted. “One reporter trying to distort 18 yr old nonstory to sow seeds of division. We won’t let that happen! #FAKENEWS. Our athletes are the best in the world and we are for ALL of them! #TEAMUSA.”

Pence, who was sent by the White House along with his wife, Karen, to lead the U.S. delegation at the Olympic Games in Pyeongchang from Feb. 9-25, then addressed Rippon directly.

“@Adaripp I want you to know we are FOR YOU,” Pence wrote. “Don’t let fake news distract you. I am proud of you and ALL OF OUR GREAT athletes and my only hope for you and all of #TeamUSA is to bring home the gold. Go get ‘em!”

The positive Twitter messages drew a sharp contrast with Rippon’s posts on the same platform. Rippon, who previously told USA Today he “doesn’t think [Pence] has a real concept of reality,” tweeted that Pence had hurt members of the gay community.

“I personally have nothing to say to Mike Pence,” Rippon wrote in January. “Given the chance to talk after the Olympics, I would want to bring with me people who’s [sic] lives have been hurt by legislation he has championed.”

The vice president attracted the ire of some in the LGBTQ community by signing Religious Freedom Restoration Act into law as governor of Indiana in 2015, which critics claimed encouraged discrimination against gay people.

Despite the bad blood, Rippon did seem open to meeting with Pence after the Games.

“If I had the chance to meet him afterwards, after I’m finished competing, there might be a possibility to have an open conversation,” Rippon told USA Today. “He seems more mild-mannered than Donald Trump.”