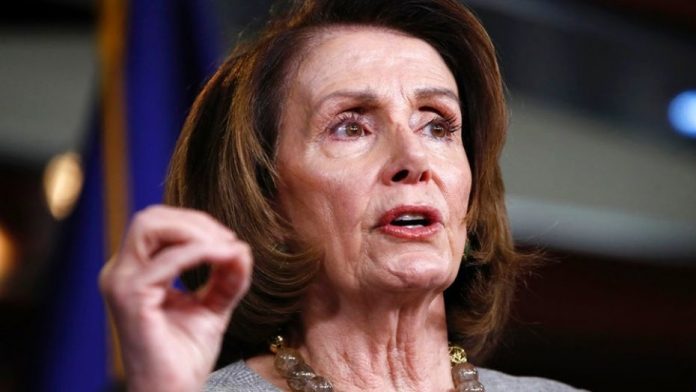 Pelosi slammed a four-day ICE raid as “unjust and cruel.”

House Minority Leader Nancy Pelosi, D-Calif., on Wednesday slammed as “unjust and cruel” a raid of illegal immigrants in California last week that netted hundreds of criminals, many with convictions for violent crimes — but which was partially thwarted by a Democratic mayor who tipped off the public to the crackdown.

The four-day raid in the San Francisco Bay Area led to the arrest of 232 illegal immigrants, 180 of whom Immigration and Customs Enforcement said “were either convicted criminals, had been issued a final order of removal and failed to depart the United States, or had been previously removed” from the country and had come back illegally.

The arrests included 115 who “had prior felony convictions for serious or violent offenses, such as child sex crimes, weapons charges and assault, or had past convictions for significant or multiple misdemeanors.”

But officials fumed after Oakland Mayor Libby Schaaf tweeted out a warning of the impending raid, a move which ICE Acting Director Tom Homan said led to as many as 800 illegal immigrants — many with criminal convictions — fleeing before they could be arrested.

ILLEGAL IMMIGRANTS WITH SEX, ROBBERY CONVICTIONS AMONG THOSE WHO EVADED CAPTURE AFTER DEM MAYOR’S WARNING

The Department of Justice is currently reviewing Schaaf’s actions. A DOJ spokesman declined to comment on the status of that review to Fox News.

But Pelosi, in a statement Wednesday, appeared to take the side of the mayor, accusing the White House of terrorizing “innocent immigrant families.”

“Just last week, President Trump decided to terrorize innocent immigrant families in the Bay Area with his unjust and cruel raids,” she said.

“The Department of Justice and the Trump administration are going to fight these unjust, unfair and unconstitutional policies,” Sessions is expected to tell California law enforcement officers in an address Wednesday.

Those laws the DOJ is fighting include a measure offering worker protections against enforcement actions and which DOJ officials claim prevent companies from cooperating with immigration officials. Another law, dubbed by critics as the “sanctuary state” bill, restricts state and municipal cooperation with federal authorities, including what information can be shared about illegal-immigrant inmates.

Pelosi said it marked “a new low” from the Trump administration and said the president was abusing the legal system “to push his mass deportation agenda.”

“The people of California will not be bowed by the Trump administration’s brazen aggression and intimidation tactics,” Pelosi said. “Californians will continue to proudly keep our doors open to the immigrants who make America more American. We will fight this sham lawsuit and will fight all cowardly attacks on our immigrant communities.”

An estimated 2.5 million immigrants are believed to be in California illegally. In the most recent figures, ICE has reported about 16 percent of its enforcement apprehensions take place in that state.