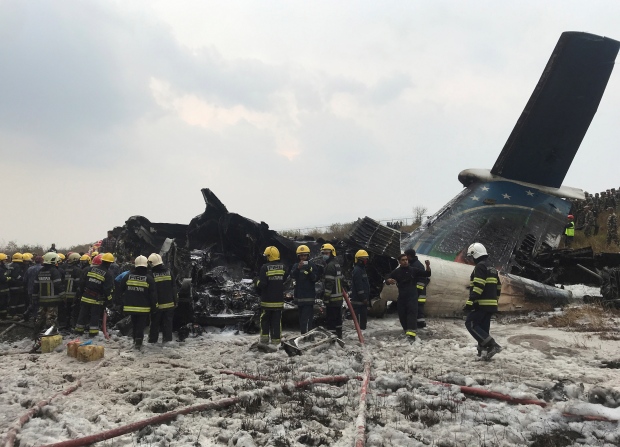 Police in Nepal say at least 38 people were killed and 23 injured after a passenger plane crashed and burst into flames as it landed in Kathmandu on Monday.

Witnesses say the US-Bangla Airlines plane swerved before it crashed and broke into several pieces. Dozens of firefighters and rescue workers could be seen gathered around the wreckage.

Amanda Summers, an American who works in Nepal, watched the crash happen from the terrace of her home office.

Wreckage of the plane is pictured in a field adjacent to the runway. (Navesh Chitrakar/Reuters)

“It was flying so low I thought it was going to run into the mountains.”

She said it was unclear if it had reached the runway when it landed.

“All of a sudden there was a blast and then another blast.”

Fire crews put out the flames quickly, perhaps within a minute, she said, though clouds of thick, dark smoke rose into the sky above Kathmandu, the capital of the Himalayan nation.

The flight was arriving from Bangladesh, said an airport official who spoke on condition of anonymity because of airport policy.

An employee who answered the phone at the US-Bangla offices in Dhaka said no one was available to talk.

“I have no other details,” said the employee, who refused to give his name. “But a bad incident has happened.”