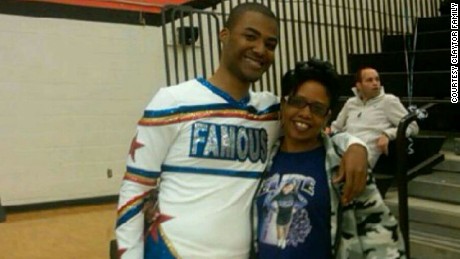 The Claytors have essentially transformed themselves into home health care workers, making their son’s life as comfortable as possible. He’s lifted and moved with a manual crane. He must be shifted and turned often to avoid bed sores. He is fed intravenously. Cedric’s daily regimen of drugs — a handful in the morning and evening — are crushed and added to his feeding bag; his oxygen levels are constantly monitored; and a pulsating sheath, called a percussion vest, is wrapped around his chest twice a day to keep mucus from building up in his lungs.

They are able to care for their son, in many ways, because of Obamacare. That’s not because they purchased insurance on the Obamacare market, nor did they qualify for Medicaid. They got insured through Howard’s job. But one part of the Affordable Care Act removed a barrier that could have destroyed any chance of the family’s ability to pay for all their son needs to remain alive.

Before Obamacare, families like the Claytors faced financial destruction if a loved one developed a serious illness.The Affordable Care Act lifted the lifetime spending limit on care that many insurance policies had. Those limits often capped coverage at $1 million or $2 million in job-based plans.

“We make good money, and it’s still hard to get by,” Howard said. “If it weren’t for Obamacare, (Cedric would) be dead a long time ago, and we’d be out on the street.”

Now, the Claytors find themselves steeped in uncertainty; they are unsure whether the terms of their current insurance will continue in the rush to repeal and replace Obamacare.

A financial lifeline at a crucial time

A decade ago, Cedric Claytor was healthy and handsome, a gymnast and a cheerleader at Saint Albans High School near West Virginia’s capital, Charleston. He went on to college and wanted to be an accountant.

At 20, he developed Budd-Chiari Syndrome, a rare liver disease that caused blood clots throughout his body and eventually devastated his liver. He needed a transplant.

“You would hate to see that your child would die,” she said, “because you were not able to afford to take them to the doctor.”

The family was getting letters from their insurance company that said payments for care would soon cease. Obamacare kicked in just as they were reaching the $1 million lifetime limit.

The Claytors are not alone as they wait to see what becomes of the Affordable Care Act and the removal of lifetime limits.

Before passage of the Affordable Care Act, the majority of insurance policies in the US, regardless of employer, had limits on spending based on the lifetime of the policyholder, annual limits or sometimes both.

A 2012 study found that about 105 million Americans with employer-provided or individually purchased insurance had some form of lifetime or annual spending limit on their benefits. The study, based on 2009 data, found that 59% of all workers getting their insurance from their employer had some lifetime limit on their benefits. And 89% of those who purchased their insurance individually had a lifetime limit.

Trapped in a body unable to function

Four years after Cedric’s liver transplant, his mother noticed her son limping. It was the beginning of another cruel descent into illness.

Cedric had developed a second rare condition, possibly inherited from the donated liver. It was a neurological disease affecting his motor functions.

The Claytors believe Cedric may have neuromyelitis optica, which can cause symptoms similar to multiple sclerosis. The diagnosis has never been confirmed, and they don’t have the resources to take to take Cedric to several doctors for a firm answer. And he’s too delicate to continue moving around, let alone from appointment to appointment, to look for answers. So his family has resigned themselves in some ways, focused on just making Cedric comfortable.

Today, Cedric is a full-time job. He has a tracheotomy, a hole in his throat, to assist with breathing. He can move his eyes and mouth.

Sometimes, he’s able to work on a computer, using his eyes to manipulate the cursor. But more often than not, he’s a 29-year-old man trapped in a body that has ceased to function.

From before the sun comes up to well after it’s down, usually around midnight, the Claytors do what that must to keep their son alive. Mary Ann left her job with the state of West Virginia to care for Cedric. Her husband, Howard, still works for the city of Charleston, and the family relies on his insurance and paycheck to keep them financially afloat.

“We’re not rich,” Mary Ann said. “We’re in the middle class that keeps getting beat down.”

The Claytors worry about any executive orders or new legislation may come next and what that would mean for their son.

“Without Obamacare,” Howard said, “you just hate to see what would happen.”