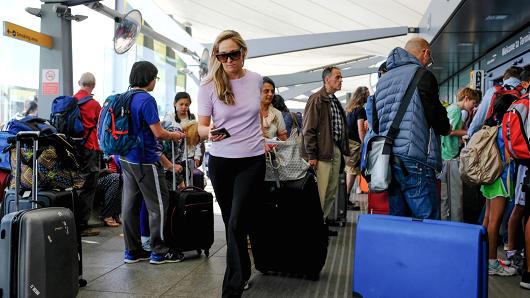 Travellers stranded outside the entrances of Heathrow Airport Terminal 5 after British Airways flights were cancelled are seen at Heathrow Airport in west London on May 27, 2017. British Airways said May 27 that it had cancelled all its flights out of major London airports Heathrow and Gatwick after an IT systems failure, warning people not to travel to the congested hubs. People outside the entrances said that they are not being allowed to enter the terminal.

BA has previously admitted that the failure of a critical computer system could result in lost revenue, since it depends so heavily on its IT systems for so many of its business processes. But mitigation factors like disaster recovery and continuity arrangements seemed to fall woefully short following Saturday’s computer outage. And this is not the first time in recent months that IT systems have failed at the airline. In September last year “patchy” check-in systems at Heathrow and Gatwick caused significant flight delays and forced travelers on several continents to queue for hours at a time.

There are of course several reasons that passengers choose a particular airline to get them from A to B, chief among them price, safety and customer service. But reliability is a major factor too, which is why British Airways was more than happy last year to highlight as an achievements that it managed more on-time departures from London airports than its major competitors easyJet and Ryanair.

But the self-proclaimed world’s favorite airline has lost a lot of fans and goodwill – in the UK and beyond – over the past few days. Airline passengers understandably want a commitment from their carrier that they will arrive at their destination on time, with all their belongings, and without major inconvenience. That’s why a premium brand like British Airways fears the fallout from major screw ups like Saturday’s computer outage not only for the short-term financial ramifications, but also for the long-term damage it can have on perceived reliability.

Chief Executive Alex Cruz replaced Keith Williams just over a year ago, and soon after he introduced a five-year plan for the company that he claimed would lower the legacy airline’s cost base but improve customer experience and invest in technology to make flight schedules more “resilient.”

British Airways sets a lot of store by its brand reputation, and by its own admission, any erosion of that brand could “ultimately affect future revenue and profitability.” Shares in parent company IAG opened lower in Madrid on Monday, despite attempts by Cruz to mollify disgruntled passengers with an online video message and after the airline’s insistence that flight schedules would return to normal within days. IAG’s chief financial officer must have been counting his lucky stars for the Bank Holiday, since it spared BA’s U.K. stock an almost certain pummeling in London trading.

But there’s no doubt investors will be watching the stock today for any turbulence that might indicate clouds on the horizon. BA introduced a new motto in 2011: “To Fly, To Serve.” Most of its aircraft may now be back in the air, but this latest mishap has served neither its customers nor its shareholders particularly well.