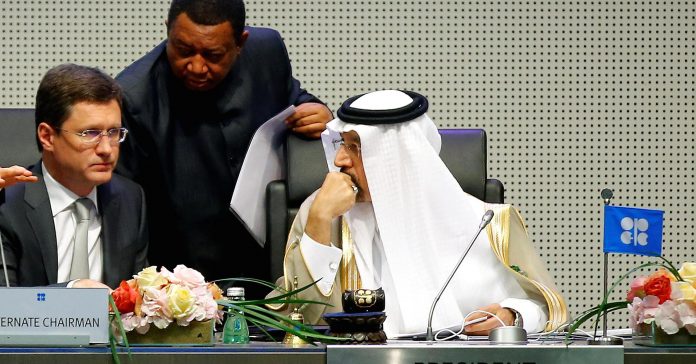 The oil market has serious doubts that the production deal between OPEC and Russia is sufficient enough to bring the world oil market back into balance, against a potential wave of new supply.

As a result, traders appeared to be adding to short positions, as crude fell sharply Wednesday morning, analysts said. The decline in oil prices was triggered by news that Libya had increased its production to a three-year high of 827,000 barrels a day.

“The game of chicken between them and the market is back on again,” said John Kilduff, at Again Capital.

West Texas Intermediate crude for July was off 3 percent, at just above $48 per barrel after briefly breaking $48. Brent, the international benchmark, briefly fell below the psychological $50 for the first time in two and was down 3 percent at $50.64 in morning trading.

Last week, Saudi Arabia and other members of OPEC agreed with Russia and other producers to extend their agreement to cut back output by 1.8 million barrels a day for another nine months. But market expectations had been hinging on the idea that producers would take even more barrels off the market because of the overhang of supply. Oil plunged 5 percent last Thursday, after the announcement.

“The meeting was much more of a failure than people realize because of what wasn’t achieved. There are no caps on production for Libya, or Nigeria, or Iran,” said Kilduff. Libya has shipped an average of 500,000 barrels per day of oil so far this year, up from 300,000 per day last year. Production reached 800,000 barrels per day earlier this month.

“There were official statements about production from the Libyan National Oil Co., and that validated it with the market,” Kilduff said.

Saudi Arabia and Russia said Wednesday that the cooperation between OPEC and non-OPEC producers would extend beyond when the deal ends. Saudi Energy Minister Khalid -Falih was quoted as saying the producers want to “institutionalize cooperation.”

Even the biggest producers need a higher oil price to meet their budget demands. Russia’s stock market was under pressure as crude prices fell, losing 2.3 percent and the ruble was down a half percent against the dollar.

Kilduff and other analysts said some speculative commodities traders cleared out shorts ahead of OPEC’s meeting last week, where the production deal was extended. Last week’s CFTC data of traders’ positions show a reduction of 91,700 short positions in futures contracts to 278,200, just ahead of Thursday’s meeting. Each futures contract equals 1,000 barrels, meaning the short position was reduced by 91.7 million barrels.

“They covered just before the meeting and that enabled them to have the dry powder to go in and attack once this news came out,” said Kilduff.

Nigeria and Libya have been wild cards in the world oil since their ability to return production to the market on a consistent basis has been in doubt. But U.S. producers have also been a problem for the OPEC deal, since shale producers, benefiting from ever-improving technology have been able to increase output, already back to 2015 levels.

The U.S., now at about 9.3 million barrels a day, could see a return to record levels of production by year-end unless prices fall dramatically.

OPEC has said the global market is showing signs of rebalancing, but U.S. inventories are staying persistently high. Weekly U.S. government data are the most accessible to the market.

“The key issue is it hasn’t really been able to manifest. If you believe what Saudi Arabia said, they’re going to try to target the inventories in the U.S., and there will probably be steeper declines because they’re going to limit their exports,” said Bart Melek, global head of commodities strategy at TD Securities.

“There are really mounting concerns about the excess supply in the world and the ability of the agreement to whittle that down,” said Gene McGillian, manager market research at Tradition Energy.

“We’re getting Libya, and the North Sea poking their heads up. Are the really going to be convinced as we approach the $45 area that they were going to be in a position to see global inventories going down?” said McGillian. He said he is watching to see if WTI futures can hold a recent low of $43.75.

“This market is in the process of testing their mettle,” Kilduff said.