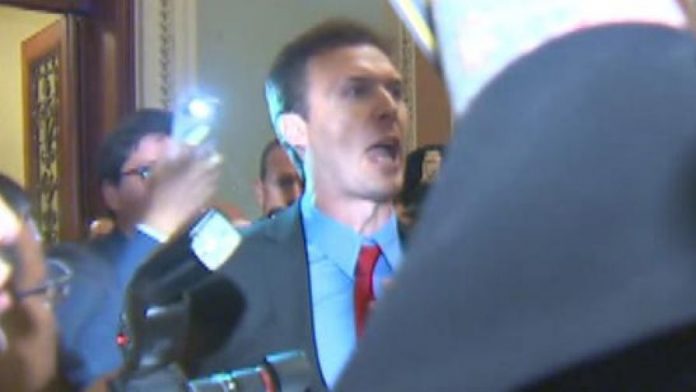 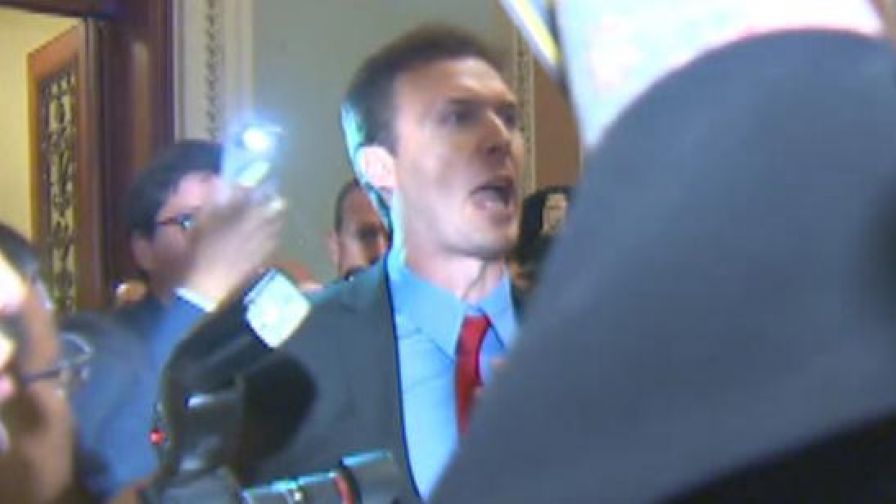 “They’ll let anyone in here.”

That’s the stale quip U.S. senators chortle when they unexpectedly spot their House colleagues wandering around the Senate wing of the Capitol. Not surprisingly, House members jest with the same banality when they spy senators roaming their turf on the other side of the Capitol dome.

But on Tuesday, the droll bon mot may have been more practice than pun. U.S. Capitol Police arrested and charged 36-year-old Ryan Clayton with “unlawful conduct.” Clayton apparently hornswoggled everyone into thinking he was a credentialed member of the Capitol Hill press corps. As a result, Clayton positioned himself just feet from President Trump when he arrived at the Capitol to lunch with Senate Republicans.

Clayton melted in with a throng of press assembled in the Capitol’s Ohio Clock Corridor. Reporters waited for the president and Senate Majority Leader Mitch McConnell, R-Ky., to walk by for a pre-lunch confab. That’s when Clayton flung tiny Russian flags bearing the president’s surname in the direction of Trump and McConnell. Clayton then hectored Trump.

“This president has conspired with agents of the Russian government.” thundered Clayton. “We should be talking about treason in Congress, not about tax cuts!”

The question confounding congressional security officials is how Clayton blended with reporters just outside the Senate chamber when he wasn’t supposed to be there.

“This was a failure on multiple levels,” said one senior source with knowledge of the security breach. “There is egg on people’s faces.”

Clayton should be no stranger to Capitol security forces. He caused a ruckus in January when the House and Senate convened a Joint Session of Congress to certify to the Electoral College. Clayton materialized at the Capitol again this summer following a meeting the presidential son-in-law Jared Kushner had with the Senate Intelligence Committee. Clayton tried to cajole Kushner into signing a Russian flag.

What galls security officials is that Clayton was on a USCP “watch list.” Not only did he make it into the Capitol itself, but he hoodwinked his way to the very locale inside the Capitol which should have been the most secure place in Washington Tuesday.

Congressional aides and credentialed congressional journalists carry “hard passes.” Upon inspection by the USCP, the passes grant reporters access to House and Senate office buildings along with the Capitol. Members of the public may simply drop by the office buildings during business hours without an appointment. Authorities restrict access to the Capitol for the public unless they are on a tour or have official business. Official visitors are given a temporary pass designating their destination inside the Capitol. Everyone must clear security and step through magnetometers before entering the office buildings or Capitol.

Fox News is told Clayton initially tried to enter the Congressional complex via the Russell Senate Office Building. Tunnels link the office buildings with the Capitol. Officers in Russell recognized Clayton and turned him away. So Clayton apparently accessed the Capitol via a tunnel connected to the Rayburn House Office Building.

Fox News is told that contrary to protocol, USCP officers stationed in the Rayburn tunnel apparently failed to check if Clayton bore appropriate credentials. Officials are now reviewing security camera footage to determine the path Clayton took to the cordoned-off area on the second floor of the Capitol by the Senate chamber.

Fox News has learned that Clayton was in possession of a four-day-old temporary visitor’s pass for the Capitol. It is unclear how Clayton came in possession of the pass or if he just discovered one discarded on the ground.

Clayton’s pass was for HVC-304. That stands for House Visitor’s Center room 304. HVC-304 is the location of the House SCIF (Sensitive Compartmentalized Information Facility). That’s a super-sensitive location in the Capitol and home to the House Intelligence Committee.

Fox News is told there is no evidence so far if Clayton attempted to enter the SCIF.

The public is permitted on the third floor of the Capitol to view House and Senate floor action from the viewing galleries. Many parts of the Capitol’s first floor are open, too. However, authorities restrict much of the second floor. The Capitol Rotunda, Statuary Hall and the old Senate chamber are open for tours. But that’s about it. The immediate areas around the leadership offices and the House and Senate floors are closely guarded– even more so when either body is in session.

It’s an altogether different enterprise when a dignitary like the president embarks on the Capitol. Officials call in extra officers. They shut down hallways. Such was the case on Tuesday when Trump journeyed to Capitol Hill. Authorities corralled many reporters on one end of the Ohio Clock Corridor to capture the arrival and departure shots of the president and McConnell. Officers double and triple checked ID’s. They even stopped some veteran senators walking across the Capitol plaza.

Fox News has learned that officials are now probing a report of a possible second interloper who may have finagled their way into the press pen awaiting the President on Tuesday. Fox News is told a middle-aged man with no press credential meshed with reporters in the Ohio Clock Corridor. When reporters asked the man which news organization he worked for, he replied, “I’m a tourist.” The man bragged he was “able to sneak in” to the press scrum preparing for Trump. Fox News is told that one reporter warned the man on at least two occasions “you’re not supposed to be here.”

It’s not known if the second individual diverted from a congressional tour and made his way to the secure area. It’s also not clear if he had connections to Clayton.

“Some heads will roll,” predicted one veteran security source.

“This was a monumental f—up,” sighed another.