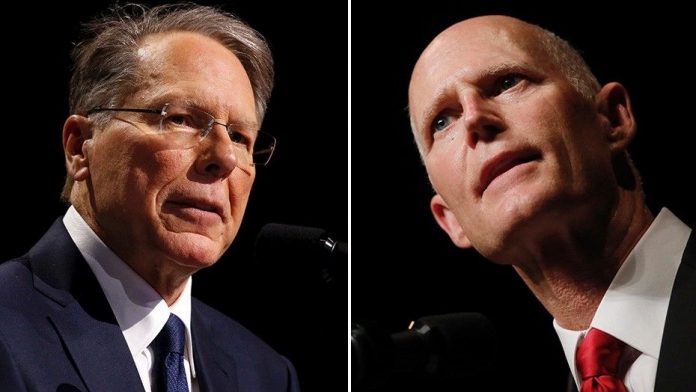 The National Rifle Association reacted Friday with a federal lawsuit after Florida lawmakers approved gun legislation that would raise the age to buy guns. The group’s argument: that the proposed law violates the Second Amendment.

News of the lawsuit came just hours after Florida Gov. Rick Scott publicly went against allies in the NRA in signing a gun control bill that was drafted in response to the fatal school shooting in Parkland, Fla., on Feb. 14. Seventeen people were killed in that gun attack, attributed to a 19-year-old named Nokolas Cruz.

Chris Cox, executive director of the NRA’s Institute for Legislative Acton, has matainted that the bill “punished punishes law-abiding gun owners for the criminal acts of a deranged individual.”

The lawsuit is asking a federal judge to block the new age restriction from taking effect.

The bill signed by Governor Scott raises the minimum age to buy rifles from 18 to 21, extends a three-day waiting period for handgun purchases to include long guns and bans bump stocks, attachments that enable semiautomatic rifles to approximate the firing speed of fully automatic ones.  Such bump stocks were used in the recent gun massacre in Las Vegas in which several dozen people died.

The bill did appeal to Republicans with the inclusion of a provision that enables teachers and other school employees to carry handguns, something President Trump was passionate about immediately following the Valentine’s Day shooting at Marjory Stoneman Douglas High in Parkland.