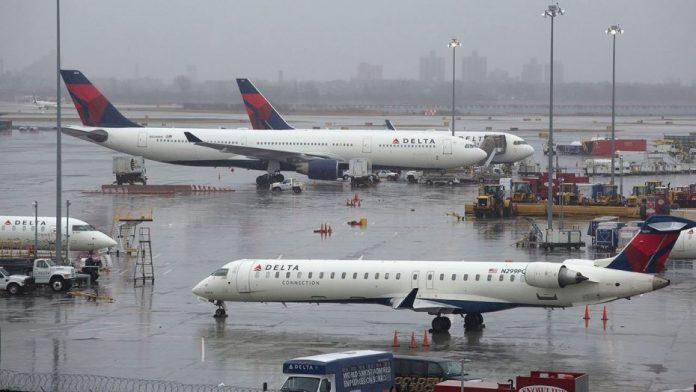 Blustery winds that lashed the East Coast on Friday — as part of a powerful nor’easter that flooded streets, grounded flights and knocked out power to more than 1.8 million customers — were expected to let up Saturday as the storm moved offshore, forecasters said.

At the storm’s height, winds exceeded 50 mph and forced airlines to cancel more than 2,800 flights. Planes at LaGuardia and Kennedy airports in New York City were nearly all grounded.

Unfortunately for passengers aboard a flight that landed at Washington Dulles International Airport in Virginia, the high winds were an inconvenience than many couldn’t stomach.

Even the pilots said they were on “the verge of throwing up” amid what they described as a “very bumpy descent.”

While most flights in and out of Washington-area airports were canceled, some planes were seen taking off and landing, Fox 5 DC reported.

Another plane at Reagan aborted its landing due to the gusts.

Aboard a Southwest Airlines flight to Washington, the captain warned passengers that if they couldn’t land they’d have to fly to Pittsburgh, Fox 5 DC said.

“I was holding on to my seat in front of me. People were throwing up all over the place,” John Kirk, a passenger, told the station. “It was pretty crazy actually. The worst flight I have ever been on.”

A second passenger told the station it was an “emotional” ride and, once they had safely landed, flight attendants told the travelers to “love each other and not to sweat the small stuff.”

Conditions were predicted to improve in Northeastern and Mid-Atlantic states as the storm shifted away from the coastline Friday night, the National Weather Service said. Rain and snow were expected to taper off early Saturday.

The nor’easter has been blamed for the deaths of at least five people as it delivered massive flooding, wind damage and power outages up and down the East Coast.