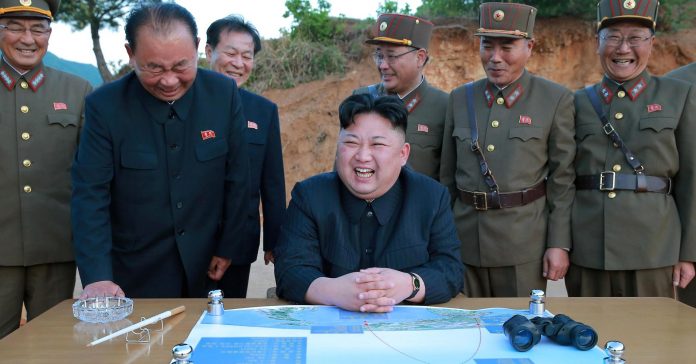 South Korea said it had conducted a joint drill with a U.S. supersonic B-1B Lancer bomber on Monday. North Korea’s state media earlier accused the United States of staging a drill to practise dropping nuclear bombs on the Korean peninsula.

The U.S. Navy said its aircraft carrier strike group, led by the USS Carl Vinson, also planned a drill with another U.S. nuclear carrier, the USS Ronald Reagan, in waters near the Korean peninsula.

A U.S. Navy spokesman in South Korea did not give specific timing for the strike group’s planned drill. North Korea calls such drills a preparation for war.

Monday’s launch followed two successful tests of medium-to-long-range missiles in as many weeks by the North, which has been conducting such tests at an unprecedented pace in an effort to develop an intercontinental ballistic missile (ICBM) capable of hitting the mainland United States.

Such launches, and two nuclear tests since January 2016, have been conducted in defiance of U.S. pressure, U.N. resolutions and the threat of more sanctions.

They also pose one of the greatest security challenges for U.S. President Donald Trump, who portrayed the latest missile test as an affront to China.

“North Korea has shown great disrespect for their neighbor, China, by shooting off yet another ballistic missile … but China is trying hard!” Trump said on Twitter.