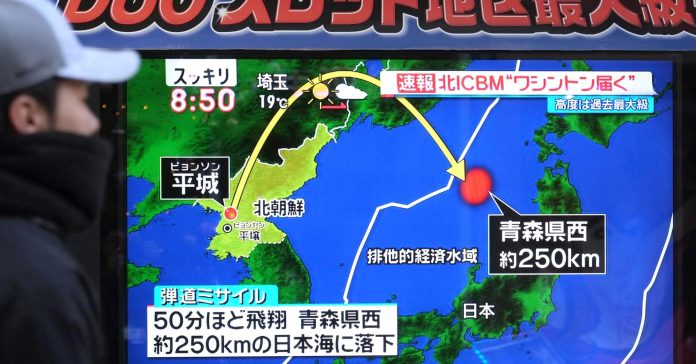 While President Donald Trump on Wednesday vowed tougher sanctions against nuclear-armed North Korea, some believe there’s a risk that Kim Jong Un‘s totalitarian regime may feel threatened enough to strike with dangerous action that could have far-reaching consequences.

In a tweet Wednesday, Trump wrote that he spoke to China‘s President, Xi Jinping, about the North’s actions and said, “Additional major sanctions will be imposed on North Korea today.” Trump is hoping China — North Korea’s longtime ally and largest trading partner — will apply enough pressure on Pyongyang to get them to abandon the country’s missile and nuclear weapons development.

Trump’s pledge to impose the additional sanctions followed Tuesday’s intercontinental ballistic missile test-firing by Pyongyang that arms control expert David Wright of the Union of Concerned Scientists said showed the North Koreans are capable of striking all of the United States. North Korea’s state media outlet KCNA said Wednesday its latest ballistic missile test was a Hwasong-15 ICBM capable of carrying a “super-large heavy warhead,” and the secretive regime added that it had completed development of its “state nuclear force.”

“We have to be careful on these sanctions,” said retired U.S. Army Lt. Col. Daniel Davis, who served as an advisor to South Korea’s military while on active duty and is now a defense expert at Defense Priorities, a Washington think tank. “We don’t want to push them too far to where it’s like we did with Japan in World War II with the embargo we placed on them.”

The retired colonel said the events leading up to then Imperial Japan attacking Pearl Harbor in 1941 included the U.S. imposing an economic embargo on Japan, including a ban on oil and gasoline exports. He said the Japanese government at the time “viewed it as an existential threat, since they can’t live without oil” so they attacked in an attempt to forestall it.

“So we don’t want to push the North Koreans too far,” Davis said. “We want to keep pressure on them but not lethal pressure because that will just cause them to strike. Let’s not just give in to it but continue to work with consistent diplomatic pressure over many years if necessary. Maybe someday we can get to a denuclearized peninsula.”

Experts say another strategy that might work is to convince the North Koreans that Trump is serious about taking military action. Some suggest this would be akin to the “madman” with the bomb signaling that Richard Nixon used during the Vietnam War.

“There’s an in-between measure that would be a high degree of military pressure,” said Denny Roy, an Asia Pacific security expert and senior fellow at the East-West Center, a think tank in Honolulu. “That is putting it in the minds of the North Korean government that the United States is seriously contemplating a military attack, even if we don’t actually intend to do so.”

In other words, Roy asserts that such military pressure from Washington would force North Korea to make the decision of whether it wants to have the nuclear capability or to survive. Others don’t see the North’s leader giving up nuclear weapons anytime soon, since the regime is well aware of what happened with Libya’s Moammar Gaddafi when he gave up his nuclear weapons programs after facing Western pressure.

Still, Roy concedes that a pre-emptive U.S. military strike is probably not realistic due to “collateral damage to South Korea.”

Even so, South Korean military leaders have expressed concern that Trump might launch a strike on the North without first consulting Seoul’s government.

Bruce Klingner, senior research fellow for Northeast Asia at the Washington-based conservative think tank Heritage Foundation, agrees that there’s “a need to continue the pressure campaign against North Korea” but he said the U.S. shouldn’t be concerned that Pyongyang may feel it’s backed into a corner.

“Really it’s a situation where you can try to contain it and defend against it,” said Klingner, a former chief of the CIA’s Korea branch. Still, he said there’s a risk of miscalculation given the increasing tensions on the Korean Peninsula and sometimes confusing and mixed signals from Washington.

At the same time, Klingner said it would be “needlessly reckless” at this point for the United States to launch a pre-emptive or surgical strike on North Korea. He said war games scenarios of North Korea-U.S. conflict that were run by Washington in the 1990s showed a war would have a “horrendous” outcome, and that was before the nuclear bomb was ever introduced.

Also, North Korea is believed to have a large stockpile of chemical and biological weapons that pose a risk. The leader of the country also has shown a willingness to use chemical weapons against his own family members.

Up to now, the U.S. has relied on an international campaign of “maximum pressure” on North Korea with sanctions but has not stopped the regime’s nuclear and missile development programs. In fact, North Korea’s launch of the Hwasong-15 ICBM represented yet another sign the country has been able to withstand the international sanctions and still advance its weapons development.

Reuters quoted the state TV in Pyongyang on Thursday as indicating that this newer missile was capable of “much greater advantages in its tactical and technological specifications and technical characteristics” than the earlier Hwasong-14 missile, an ICBM tested twice in July.

“Yet again they seem to have gotten it right on the first flight test of a new missile,” said Thomas Karako, a senior fellow at the International Security Program and director of the Missile Defense Project at the Center for Strategic and International Studies, a Washington-based think tank.

Added Karako, “North Korea has run out a lot of new missile types in the past two years. So that kind of speaks to the fact that they’ve got some serious missile skills. They are exercising them, and I would be surprised if they are going to rest on their laurels as opposed to continue to develop new and more capable systems.”

The United Nations Security Council is scheduled to hold an emergency meeting Wednesday. There have already been at least two Security Council resolutions since August that target the importation of North Korea’s seafood, textiles, coal and iron as well as actions by China and others that curtail the regime’s oil and other energy supplies.

That said, China and Russia have refused so far to slap a complete oil embargo on North Korea, worried it might force the hermit regime to get desperate. Also, China’s semi-official Global Times newspaper said in a story published Thursday that Beijing opposes “any unilateral sanctions” that might bypass the U.N. Security Council or what it termed “any long-arm jurisdiction.”

“We’ve pretty much ridden the China horse for as long as it can go,” said Roy of the East-West Center. “At the same time, we can’t expect China to see the issue the same way we do. They don’t want a collapse of the regime. So they won’t take drastic action such as overthrowing the regime for us.”