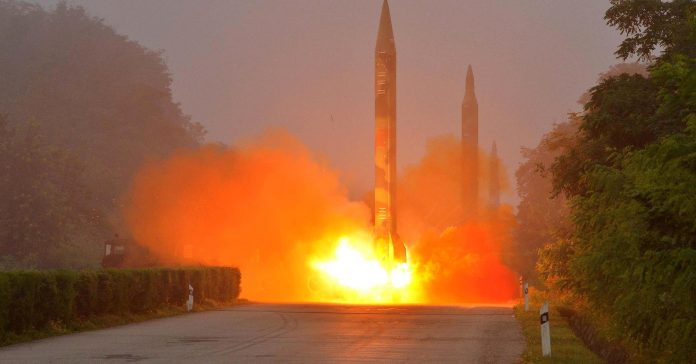 North Korea fired a new missile, according to South Korea’s military, its 9th this year and the latest act of provocation by North Korean leader Kim Jong-un in the face of widespread international pressure.

Yonhap News, which was the first to report the test, said the country fired off what appeared to be a ballistic missile near the North Korean coast early Monday local time. The projectile flew for 6 minutes before landing in the Sea of Japan, a military official told NBC News — unlike a few previous efforts where the missile exploded almost immediately.

The test comes as Kim has reportedly supervised test runs of new anti-aircraft weapons, and continues to heighten tensions on the Peninsula.

“North Korea launched an unidentified projectile from a site in the vicinity of Wonsan in Gangwon Province at dawn today,” a statement by South Korea’s military confirmed. The launch was reported to newly-elected president, Moon Jae-in, who backs a sunshine policy with North Korea. Moon ordered a national security meeting to convene at 730 am local time, the statement added.

North Korea — which has openly defied 3 U.S. presidents while stymieing efforts to resolve the crisis multilaterally— appears to be testing the resolve of the United States. Officials in recent days have stated unequivocally that the “strategic patience” cultivated with North Korea was drawing to a close, but the country has conducted at least eight missile tests this year.

President Donald Trump, just returning from his first official visit overseas, has warned that military action against North Korea was on the table, regardless of the risks. Trump told CBS in a recent interview that ‘we’ll see’ if an armed confrontation was needed to deter Kim’s ambitions, but expressed optimism that pressure from China could be brought to bear on the nation.

In an interview on Sunday with CBS’s “Face the Nation,” Defense Secretary James Mattis cautioned that a conflict with the hermetic Communist nation “would be probably the worst kind of fighting in most people’s lifetimes,” and could be “catastrophic” if not resolved diplomatically.

A report in the Voice of America cited unnamed sources as saying the U.S. was ordering a third aircraft carrier strike force to the region, as a warning to Kim to stand down. The USS Carl Vinson and the USS Ronald Reagan are already stationed in the Pacific Ocean.