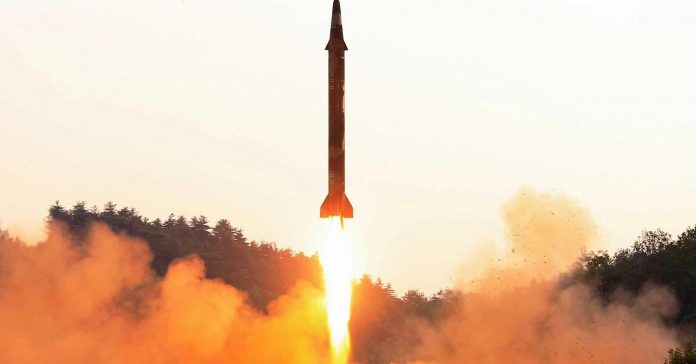 Ever since President Donald Trump took office on Jan. 20, tensions with North Korea have escalated rapidly.

Their most recent attempt to launch a ballistic missile capable of hitting the South Korean capital of Seoul took place on Friday. Like other tests, the missile failed.

Meanwhile, leader Kim Jong Un has made no secret of the fact that his scientists are working on a nuclear-tipped missile capable of reaching America.

One senior North Korean official told NBC News that the country is ready to test fire an intercontinental ballistic missile “at any time, at any place.”

The situation is so fraught that Secretary of State Rex Tillerson recently asked China — Pyongyang’s neighbor and powerful ally — to “use their influence to convince or compel North Korea to rethink its strategic calculus.”

But Pyongyang has blithely ignored warnings by Tillerson that military action is “on the table” if they continued to test intercontinental ballistic missiles.

North Korea’s representative at the United Nations, Kim Im Ryong, flat-out warned that the Trump administration’s get-tough strategy was creating “a dangerous situation in which thermonuclear war may break out at any moment.”

For his part, Trump has dismissed as failures attempts by his White House predecessors to derail North Korea’s weapons programs.

Here’s a timetable of how the recent crisis has unfolded:

Feb. 12: In its first show of defiance against the Trump administration, North Korea successfully launches a solid-fueled ballistic missile called the Pukguksong-2 from a submarine.

March 6: North Korean artillery units fire four ballistic missiles into the Sea of Japan as part of a simulated attack on U.S. military bases in Japan. Three land within 200 miles of Japan’s coastline and the country’s Prime Minister Shinzo Abe calls it “an extremely dangerous action.”

March 14 : The U.S. dispatches high-tech missile defense Aegis warships to the waters where the North Koreans fired the missiles for maneuvers with Japanese and South Korean warships.

March 15: Tillerson arrives in Japan for his first Asia trip as secretary of state.

March 19: The North Koreans test a new rocket engine, claiming its part of their space program.

April 2: Trump declares the U.S. will go it “alone” if China does not help solve the North Korean nuclear problem.

“China will either decide to help us with North Korea of they won’t,” Trump tells the Financial Times. “If they do, that will be very good for China, and if they don’t, it’s won’t be good for anyone.”

April 5: The North Koreans test fire a medium-range missile they claim is capable of destroying a U.S. aircraft carrier. It fails.

April 10: The USS Carl Vinson, an aircraft carrier, is dispatched to the region in a show of force.

April 15: The North Koreans test fire yet another KN-17 missile. It too fails. In Pyongyang, top official Choe Ryong accuses Trump of “creating a war situation” by dispatching U.S. forces to the region.

April 26: With tensions building, the U.S. test fires a $40 million Minuteman III missile at Vandenberg Air Force Base in California. North Korea calls it a provocation.

May 2: In a telephone conversation, Trump and Russian President Vladimir Putin discuss “how best to resolve the very dangerous situation in North Korea.”

May 14: North Korea launches a ballistic missile that flies around 430 miles before crashing into the Sea of Japan. “With the missile impacting so close to Russian soil — in fact, closer to Russia than to Japan — the President cannot imagine that Russia is pleased,” the White House says in a statement.

May 17: Two U.S. defense officials confirm to NBC News that North Korea’s launch of a KN-17 missile three days earlier was successful. The re-entry was controlled and the vehicle did not burn up, the officials said. It landed in the sea near Russia.