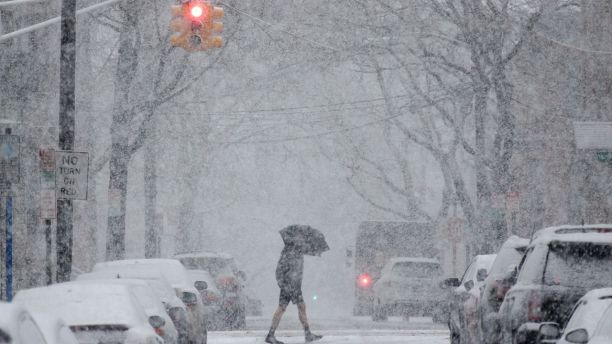 Heavy snow is falling across the Northeast on Wednesday as another nor’easter slammed into the region in less than a week, creating travel headaches as thousands of flights have been canceled and several governors have declared a state of emergency.

The storm is expected to drop more than a foot of snow in interior locations throughout the day, especially in locations from northern New Jersey, the lower Hudson River Valley and into northern Connecticut and western Massachusetts, according to Fox News Senior Meteorologist Janice Dean.

“This is a tough forecast as there is a sharp gradient of snowfall accumulation to the north and west where over a foot is expected,” Dean said.

A man crosses the street through heavy snow in Hoboken, N.J., Wednesday, March 7, 2018.

Snow from the storm is expected to be heaviest through the afternoon and evening hours on Wednesday, according to Dean. There could be isolated snow totals of over 18 inches where the heaviest bands set up, but heavily populated areas near the coast won’t see that much.

“This is a tough forecast as there is a sharp gradient of snowfall accumulation to the north and west where over a foot is expected.”

“This system is expected to track slightly closer to the coast, resulting in more rain mixing-in near the immediate coast,” she said Wednesday. 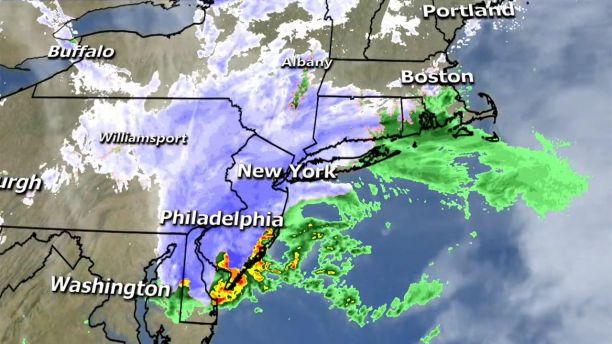 The location of the nor’easter as of 1 p.m. on Wednesday.

By evening the storm dumped snow at a rate of 2 or 3 inches an hour, with some places in New Jersey, New York and Connecticut getting well over a foot. Butler, New Jersey, got 22 inches, Sloatsburg, New York, 23 inches and Newtown, Connecticut, 14 inches.

Wind gusts up to 60 mph were forecast on Cape Cod, 45 mph at the Jersey shore and 30 mph around suburban Philadelphia but not as severe as from the previous storm, in which 9 people died.

SECOND NOR’EASTER STRIKES THE NORTHEAST IN LESS THAN A WEEK

The governors of New Jersey and Pennsylvania declared states of emergency before the flakes started to fall, and as school districts and municipal operations around the region closed for the day.

Utility workers took advantage of milder temperatures and sunshine Tuesday in their scramble to restore electricity to thousands of customers around the Northeast. 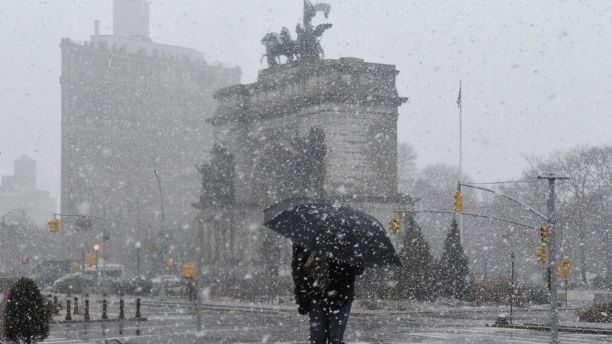 A person walks through the snow during a storm in the Brooklyn borough of New York City, U.S., March 7, 2018.

The outages turned to outrage for a New Jersey man whose home had been without electricity since Friday. Robert Winter, 63, threatened to kidnap a utility company employee and blow up a substation, according to police in Vernon. He was charged with making terroristic threats.

Power customers in New Jersey also took to social media to share their frustration of still being in the dark.

PECO, Pennsylvania’s largest electric utility, reported 120,000 outages by evening, about 6,000 of which were left over from last week.

Airlines canceled close to 2,400 flights in the U.S. on Wednesday, according to flight-tracking website FlightAware. Newark Liberty International Airport was the most impacted so far, with over 650 flights canceled due to the storm. The airport temporarily suspended flight activity due to “intensified weather conditions” but resumed operations later in the afternoon.

In the New York area, John F. Kennedy International Airport reported 467 cancellations as of 2 p.m. while LaGuardia reported 587 cancellations, according to the Port Authority of New York and New Jersey. 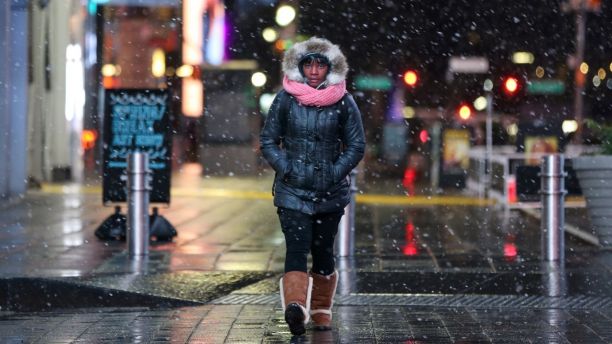 “The Port Authority strongly urges travelers to check with their carriers to make sure their flight will be taking off before going to the airport. If warranted, the Port Authority also is prepared to partner with airlines and terminal operators to accommodate ticketed passengers who may become stranded at the airports,” the agency said.

Officials in at least two states banned big rigs from major highways and warned other drivers to stay off the roads as the storm ramps up.

Tractor-trailers have been banned on the New York State Thruway from the Syracuse area to New York City, as Gov. Andrew Cuomo said state troopers will ticket any violators.

In Pennsylvania, all commercial vehicles are banned from interstates 380 and 84, while empty straight trucks, double trailers and other types of commercial carriers have been ordered off several other major interstates including 78, 81 and 80. Officials have also reduced speeds to 45 mph.

Amtrak canceled more than 50 trains on Wednesday, and regional rail trains in Philadelphia and New Jersey will be operating on special schedules.

“Amtrak is actively monitoring the approaching storm and positioning engineering crews and locomotives at strategic locations along the corridor,” the rail carrier said. “Additionally, we are working with tree removal companies to proactively remove limbs and branches that are close to the right of way.”

A middle school teacher in southern New Jersey was struck by lightning during the Nor’easter which brought “thunderstorms” to the east coast.

Capt. Todd Malland of the Manchester Township police department said the woman was holding an umbrella while on bus duty outside the Manchester Middle School around 2:30 p.m. when the strike occurred.

Malland says the woman felt tingling but didn’t lose consciousness and wasn’t knocked to the ground. She was taken to a hospital with non-life-threatening injuries.

A second woman who had been standing underneath the umbrella but not holding it escaped injury.

Ten people were taken to hospitals with symptoms of carbon monoxide poisoning after running a generator inside a home in North White Plains, New York, police said. All were expected to survive.

The National Weather Service urged people to stay off the roads to allow emergency and road crews to do their jobs, as some areas will get as much as 2 to 3 inches of snow an hour. Officials also advised homeowners to be careful while shoveling, saying the weight of it has been known cause heart attacks.

Fox News’ Shira Bush and The Associated Press contributed to this report.