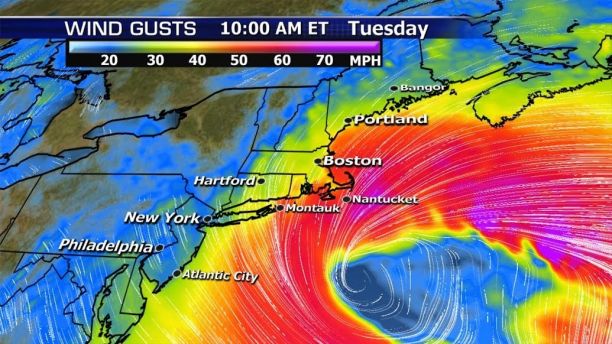 BOSTON –  A nor’easter that could deliver up to 2 feet of snow to some areas socked New England on Tuesday, bringing blizzard conditions to parts of coastal Massachusetts, covering highways with snow and knocking out power to tens of thousands.

A blizzard was confirmed in Boston, as well as parts of Massachusetts’ South Shore and Cape Cod. Blizzard warnings were issued for the entire coast of Maine, New Hampshire and most of Massachusetts.

The rest of New England was under a winter storm warning, and a winter weather advisory blanketed most of New York and portions of New Jersey, Pennsylvania, West Virginia and North Carolina.

The expected winds from a nor’easter impacting the Northeast on Tuesday.

Although the latest storm was not expected to bring as many power outages as a nor’easter last week because the snow is lighter and fluffier, more than 150,000 customers in Massachusetts lost power by late Tuesday morning. 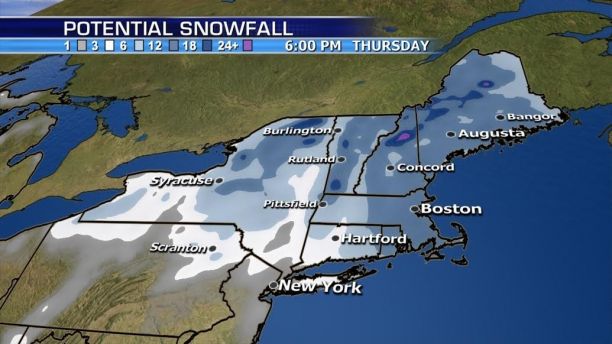 The snowfall forecast from a nor’easter bringing blizzard conditions to parts of the Northeast.

Joe Rotella ducked into a train station as he tried to find his way to a hotel that’s hosting a convention where he’s speaking. Organizers were scrambling to find ways to video conference in speakers whose planes were delayed or canceled, said Rotella, chief medical officer with the American Academy of Hospice and Palliative Medicine.

“As a visitor to Boston, I’ve been looking forward to this for months and this is kind of an adventure for me,” the Louisville, Kentucky, man said. “I didn’t have to go through the last two nor’easters so this still feels like fun.” 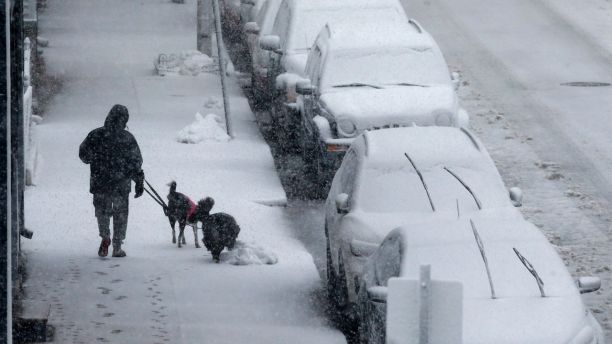 A person walks dogs on Marginal Street in Boston, Tuesday, March 13, 2018. Boston finds itself in the bullseye of the third nor’easter in two weeks.

The storm was expected to last through most of Tuesday, disrupting road and air travel.

The flight-tracking site FlightAware reported more than 1,300 canceled flights within, into or out of the U.S. on Tuesday. Amtrak suspended all service Tuesday from Boston to New York’s Penn Station.

At the Yotel hotel in Boston’s Seaport neighborhood, guests were busy rescheduling their flights over breakfast or, in the case of 80-year-old Roy Zaloom of Ramsey, New Jersey, preparing for a morning drive back home with his family.

“Let’s’ hope this is the end of it, the end of the snow. We’ve had too much of it at one time,” said Zaloom, recalling that he got a foot in New Jersey last week.

The weather service defines a blizzard as three or more hours of sustained wind or frequent gusts to 35 mph or greater; and falling or blowing snow that reduces visibility frequently to less than one-quarter of a mile.

Boston and eastern Massachusetts, as well as Rhode Island, could get a foot and a half of snow, with less to the west of the city.

In Rhode Island, the storm closed schools and businesses across the state, knocked out power and made driving treacherous. Gov. Gina Raimondo urged residents to stay off the roads and let the plows and work crews do their jobs. 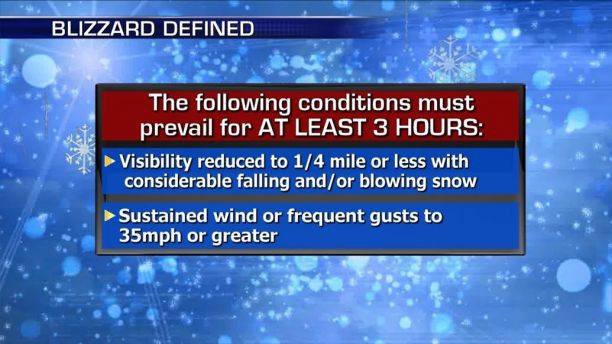 The criteria for blizzard conditions.

“I know we’re all ready for winter to be over. This is the third storm in a row. I know folks are weary with power outages but hang in there with us,” the governor said.

In New Hampshire, as much as 14 inches of snow is forecast, and the storm is wreaking havoc with the age-old town meeting tradition.

More than a foot of snow was expected in parts of Connecticut.

Maine braced for a hard hit. The Portland International Jetport has had 75.5 inches of snow, far above the normal for the date of 51.8 inches. Another 12 to 18 inches is expected, said James Brown, of the National Weather Service.

“We’re not out of winter yet, that’s for sure,” Paul Knight, of Portland, said as snow accumulated on his eyebrows during a stroll. “The groundhog was right. Six more weeks of winter, and probably then some.”