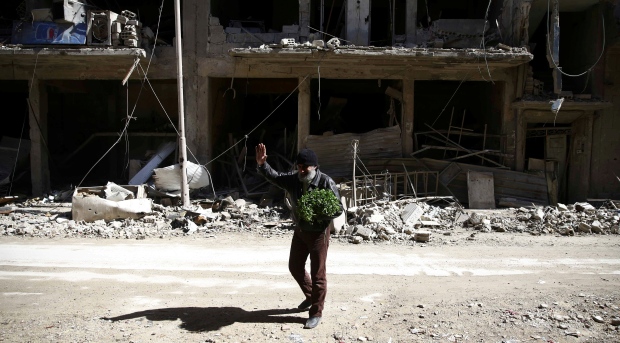 A brief humanitarian pause ordered by Russia has taken effect for the second day in a rebel-held region near the Syrian capital, but no civilians have used the exit corridor to leave, and ground battles were reported in the area.

The Syrian Observatory for Human Rights said the pause in eastern Ghouta on Wednesday was preceded by a barrage of airstrikes in the towns of Harasta and Douma, where Syrian troops are also trying to push ahead with a ground offensive.

The observatory said government shelling and limited clashes were reported on three fronts since the pause began.

On Tuesday, the first day of the Russian plan, the agreement collapsed into renewed bombardment after a brief lull.

The territory of some 400,000 residents is the last major opposition-controlled area near Bashar al-Assad’s seat of power, and the rebels have been targeting the capital with volleys of mortar shells, disrupting life in a reminder that they can deprive the city of peace as the government, backed by Russia, rains down bombs and carnage on the besieged area.

If government forces retake eastern Ghouta, only one small pocket south of the capital held the Islamic State in Iraq and Syria will remain out of government control.

On Feb. 18, the government and its allies began one of the heaviest bombardments of Syria’s seven-year conflict on eastern Ghouta, killing hundreds of people in air and artillery strikes, the Observatory and local rescue workers said.

A man crosses the street lined with destroyed buildings in the besieged town of Douma, eastern Ghouta, on Tuesday. (Bassam Khabieh/Reuters)

That led the UN Security Council to pass a resolution on Saturday calling for a full, 30-day humanitarian ceasefire reaching across all of Syria but excluding some jihadist groups.

Moscow and Damascus blamed rebels for the collapse of the truce on Tuesday, saying fighters had shelled a safe route intended for civilians to leave the enclave.

The insurgents denied such shelling, and a senior U.S. general accused Moscow of acting as “both arsonist and firefighter” by failing to rein in Assad.