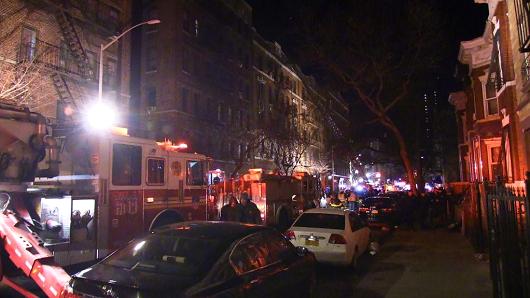 About 170 firefighters worked in bone-chilling cold, just 15 degrees, to rescue about a dozen people from the building.

Thierno Diallo, 59, a security guard originally from Conakry, Guinea, who lives in a ground floor apartment said he was asleep when he heard banging on the door. It took him a moment to realize what was happening.

“Only when I heard people screaming, ‘There’s a fire in the building!'” he said. “I heard somebody, ‘Oh! Fire! Fire! Fire!'”

He ran outside in his bathrobe, jacket and sandals.

Kenneth Kodua, 37, said he left his apartment to get food, leaving his roommate behind, and came back to find people fleeing in a panic.

Hours later, he was still trying to find out whether his roommate had escaped.

Many questions remained in the immediate aftermath of the blaze, including how the fire spread so quickly in a brick building built after catastrophic fires at the turn of the 20th century ushered in an era of tougher enforcement of fire codes.